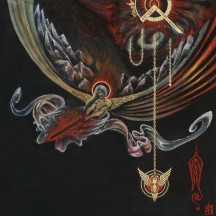 
Start your new year off the right way: by pledging allegiance to the Unholy Church of Mystiskaos.

The black metal collective/label that is Mystiskaos, founded in 2016 by Skáphe's Alex Poole and Wormlust mastermind HV Lyngdal, is undergoing a period of expansion. Early on material released by the group was limited to projects that its members had already started before its foundation, but recently things have gotten a little more interesting with the addition of some new beasts to the equation. 2017 saw the emergence of Entheogen, and now in late 2018 a vile creature known as Guðveiki has joined the fray as well. Featuring Poole on guitar, Lyngdal at the helm handling vocals, and Jack and Stephen Blackburn of Chaos Moon and Entheogen note handling additional guitar and drum duty, Guðveiki is something of a game changer for the Mystiskaos guys, seeing them going in a much more assertive and ferocious direction more in line with death metal than the hallucinatory black metal weirdness they're become known for.

Of course, however, given the prior backgrounds of each member and their overall habits for experimentation, as one could probably assume Guðveiki features a significant deviation from what would be classed as "traditional" death metal songwriting. Taking a noticeable influence from Alex Poole's Skáphe work, the riffs here seem to snake in and out of each other, sprinkled with an otherworldly sense of dissonance and dark psychedelia that makes the music give off a truly nightmarish aesthetic of cacophonous, distorted harmony. The result is cold, ugly, and downright bludgeoning, further bolstered by the superb, banshee like howling of Lyngdal and the considerably impressive (though at times overwhelming) drum work of Jack Blackburn. The only noticeable fault with this Vængför debut from the band is that it has little variation in delivery to it, and at times the tracks appear to really blur together and be somewhat inseparable from each other, all being pretty damn unrelenting and pummeling. Closing track "Undan Stormi Eiturtára," which features more guitar leads and a greater variation in tempo, comes as a slight exception, and in the future the sound of Guðveiki would probably come off as a little less monolithic if they went more in this direction.

Guðveiki is an Icelandic phrase that roughly translates to "God disease." And it is a fitting name for this bunch, as the music they conjure does indeed feel like some terrible, divinely sanctioned plague descending upon you: infectious, suffocating, and unrelenting. With Vængför one could perhaps complain about a murky, unclear production or the fact that its unrestrained approach lacks diversity, but all things considered, if the parties involved set out to craft something truly evil and unsettling with this release, they most definitely succeeded. Overall Vængför is yet another powerful release that demonstrates that the extreme metal juggernaut that is Mystiskaos shows no signs of slowing down anytime soon.

Written on 04.01.2019 by
Apothecary
Comforting the disturbed and disturbing the comfortable since 2013.
More reviews by Apothecary ››