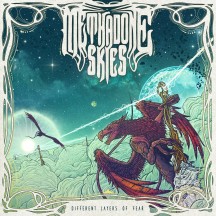 
I'm not even gonna try to hide my bias. Methadone Skies are an instrumental stoner/psych/post band from my city. I'm fully aware of how over-saturated the world is of local bands like that, but Different Layers Of Fear may be worth your attention.

Now I'm admittedly in a very hard position where I have already admitted my bias, and I have to give you some objective reasons beyond "Dude, trust me" to check out an album of over 70 minutes in a genre that has local bands in pretty much every city under the sun who try to find a new way to have "weed" or "bong" or some related word in their band name. And I admit that having seen them live so many times, either at local festivals or opening for some other band, I was never too impressed by them outside of thinking that they were good. That was until a year ago, specifically when I saw them open for Motorpsycho when they premiered some new songs live. And then it clicked and I knew that this new album would be their best.

And I wasn't that excited for a new Romanian album in quite a while, so when I finally heard the final product, my expectations were more or less met. It is indeed their best album and one of the best in its genre that I heard this year, but it's not exactly the flawless album I was expecting it to be. Part of it is due to how long the album is and how some parts of songs like "Ol' Painless" and "A Glitch In The Sun" do feel a bit awkward, like they aren't working as good as they should be. But those moments are far overshadowed by moments where the atmosphere is settled. The production makes it so that each instrument can shine properly, from the buzzing bass to the groovy drums and the guitars that move from crushing to airy with ease.

Methadone Skies are at their core a stoner rock band, but their music does go into prog rock, space rock, post-rock, post-metal or doom metal territories. On this album, it is mostly the post influence that is most strongly felt. Them being an instrumental band, their post influence is closer to other instrumental bands like Pelican and Russian Circles. And most of the time, it doesn't feel like the song really needs any vocals, which is a good thing to feel regarding an instrumental post band. We do get a bit of vocals on the song "A Glitch In The Sun" courtesy of Shores Of Null's Davide Straccione, who has provided vocals to the band on a previous record. Other than vocals, there is also some other guest contribution by Marius Muntean of The Thirteenth Sky, whose synths have quite a nice and strong presence on the last track.

The album may be a bit too ambitious in its length, but to have an album's longest track be the best one does speak volumes about the band's compositional abilities. There's some great flow in the album that makes it not feel boring despite its length and lack of vocals. And it just sounds damn great.

Written on 17.05.2019 by
RaduP
Doesn't matter that much to me if you agree with me, as long as you checked the album out.
More reviews by RaduP ››