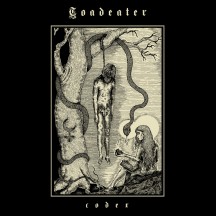 
Maybe I don't like crust on my pizza, but I sure like crust in my black metal.

Toadeater are a crusty post-black metal band from somewhere in Germany. They were also the first band I ever covered for our Clandestine Cuts series, where I covered their debut demo. That one immediately caught my eye with how hilarious the image of a toad eating a human is, and thankfully they also had the chops to make music that at least lives up to the image. Codex cover image is admittedly less hilarious, but it fits the atmospheric and vicious music much better. So looking at Codex and then back at the demo feels a bit like seeing your kid grow, but hey, let's not get too attached.

The production here feels very unique in its lo-fi way, even though it sounds a bit mangled, it has its own punk charm that I haven't heard in this exact way yet. It is quite jarring at times, so this is one spot where I hope Toadeater will improve further, but it still doesn't get in the way of this album being enjoyable as it is. In fact, it sometimes even adds to the atmosphere, making the faster parts feel like more a unitary sound instead of multiple band members performing. You can still tell apart the instruments with no issue, but it sounds like multiple limbs of the same body.

And it creating an atmosphere even in its most mosh-able moments is what I liked about Toadeater in the first place, though I would've been curious to hear more reworked songs from their demo instead of just "Parasite". There seems to be more post-black metal here than punk, but it is the latter that really adds some spice and energy into Codex. A lot of slower and more ambient parts, including even a full ambient interlude, take a few cues from post-rock, mostly in the guitar playing, but they never feel like they're there just to add space.

While it's definitely a step up from the debut, there's still a bit of work left on the production side, but Codex still cements Toadeater as a band to look forward too, one that manages to bend post-black metal and crust punk to create atmospheric music that you can mosh to.

Written on 29.08.2019 by
RaduP
Doesn't matter that much to me if you agree with me, as long as you checked the album out.
More reviews by RaduP ››