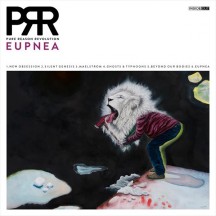 
There seems to be a real trend of prog bands releasing albums in 2006, going on an extended hiatus, and coming out with new material just now. There were Tool and Disillusion in 2019, and Green Carnation coming up this spring. Pure Reason Revolution's 2006 debut The Dark Third wasn't their most recent release, but it was their most lauded, and after nearly 10 years away, they've returned with a worthy successor.

The Dark Third was a beguiling, soothing yet haunting release that charmed near anyone who encountered it. The two next releases from the group, Amor Vincit Omnia and Hammer And Anvil were more divisive, with a greater electronic emphasis, and leaning more towards alternative and poppier songwriting. Having recently tried both albums, I do moderately enjoy both, but I must say I'm glad to see them return to a proggier sound on Eupnea, their first album in a decade. For the first time since "The Bright Ambassadors Of Morning", there are songs exceeding 10 minutes, with both "Silent Genesis" and the title track breaking this barrier. The tone also is more in line with the mellow subdued tone of their debut; however, Eupnea is very much its own thing instead of a simple retread of former glories.

For a start, the sound on this one feels sharper and more immediate. The same bewitching vocal interplay between Chloë Alper and Jon Courtney that shone so brightly on past records is present here; however, compared to the hazy, mellow sound of The Dark Third, both singers, and Courtney in particular, sound clearer and more up front in the mix this time around. This fits quite nicely with the noisier guitar work on display in the louder moments of strong opener "New Obsession" and other tracks. In contrast, "Silent Genesis" follows in the footsteps of "The Bright Ambassadors" from its earliest moments with a subtle, slowly developing introduction, which also brings to mind the epic "Anesthetize" by fellow British mellow progsters Porcupine Tree. "Silent Genesis" acts as a nice demonstration of Pure Reason Revolution's abilities, including the measured progression of the songwriting, sad vocal hooks, delightful proggy jam midsection and big, headbanging riffs. The opening salvo of these first two tracks emphatically announces that Pure Reason Revolution the prog band are back in business.

From then on, there's plenty more treats left to discover, including the serene extended vocal duet "Maelstrom", whose chorus is as upbeat as anything I've ever heard from the group, and the driving rock of "Ghosts & Typhoons". The best is saved for last, with the elaborate and sumptuous title track nicely sounding off this impressive comeback. Ultimately, Eupnea isn't a direct replica of the majestic sound of The Dark Third, nor it is quite its equal; however, it's closer to being both those things than one could realistically expect after the drastic change in style and subsequent demise that followed the debut, and should be warmly received by anyone who felt Pure Reason Revolution had unfinished business in the prog sphere.

Written on 25.02.2020 by
musclassia
Hey chief let's talk why not
More reviews by musclassia ››