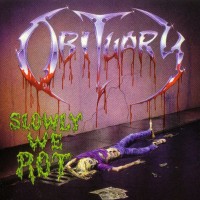 
It's rare that a band's debut record can be as strong as this, and it is even scarcer that said record can be a seminal album in a genre, but this is what Obituary achieved with Slowly We Rot, one of the best and influential death metal records since the spawning of the genre.

Am I taken to hyperbole? Maybe, but there is no denying the quality of the material the band put out with this album. Slowly We Rot is rightfully placed on a high tier of quality in metal, let alone just death metal, above most other albums. If you have yet to hear it and you are a fan of death metal then a) how have you not got round to listening to it yet? And b) you will take to this as meeting someone new but who feels like an old friend, for it has inspired so many that have come after it.

Featuring a slew of tracks that are rightfully considered classics of the genre, you will find yourself spoilt for choice trying to pick a favourite amongst the plethora here. I would highly recommend listening to the whole album rather than picking individual tracks as you will find plenty to satiate your want of quality metal.

Obituary had talent in spades and beyond their years (with the band members being around 20 at the time of the album's release), and they utilized these talents to their capacity and then some on Slowly We Rot. Tardy's death growl set a standard that many measure themselves against to this day, guttural, powerful and evoking a mix of atmosphere that doesn't sacrifice impact. Being able to unleash hellhound levels of barks to high-speed scattergun roars that sound like the sonic impact of a 40-a-day cigarette habit while gargling on razorblades. West and Peres manage to create some of the heaviest but no less catchy riffs (while in standard tuning no less) that you will hear in the genre. From the groove rhythms of the title track to the sharp "Deadly Intentions", the pair ensure each track is given its own strong riff.

Not only is the album high in quality, it also brings a level of diversity in the sound of death metal that was still relatively new and in its embryonic stages. Bringing the range of tempo shifting in the death metal genre to a new level, Slowly We Rot may not have been the first to switch tempos but they made it their forte by doing it with such ease and dynamism. Inserting a level of groove into the caustic death metal sounds, the songs naturally float between doom-esque sludge, mid-pace groove and furious up-tempo death. "'Til Death" is a great example of how to do all three in the space of four minutes, and is not the lone example of this on the album.

This sonic diversity in the band's sound ensures that Slowly We Rot avoids the pitfalls that befall many a death metal album, namely becoming one-dimensional and wearing thin should the quality drop for any reason. While the drop in quality isn't an issue here, the diversity on this album keeps the album sounding fresh even after repeated listening, allowing you to focus your ears on different aspects of the tracks on each playthrough should you want to delve deeper than the upfront power that hits you square in the face on initial spins.

The only song that is slightly weaker than the others is "Words Of Evil" and even then it is still high quality. Sounding like an incomplete idea, it will still entertain you but it will just leaving you with the feeling that with more time the band could have expanded on the blueprint laid out as it is; the annoyance comes from knowing the band could have turned what is a good track into something great and you're only left with the possibility rather than the actuality.

A must listen for anyone who wants to delve deeper into death or more extreme metal, Slowly We Rot would be the opening salvo from a band who would go on to have a big impact on the death metal scene and release several more high quality albums; Obituary were full of life and ready to go.

Written on 24.07.2020 by
omne metallum
Just because I don't care doesn't mean I'm not listening.
More reviews by omne metallum ››