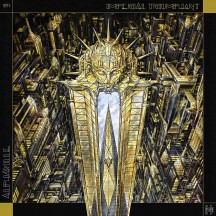 
Imperial Triumphant may have very well become one of my absolute favorite Avant-garde bands of the past ten years.

Not to say that the band weren't up to good things prior to 2015, but it was really the Abyssal Gods album, from that same year, that shifted Imperial Triumphant into far more abstract and deconstructionist territory. The band began to develop a new, highly theatrical aesthetic, one strongly influenced not only by the urban environment of New York City from which they hail, but also classic noir and dystopian literature and film. While they received a fairly warm reception to Abyssal Gods, it was really 2018's Vile Luxury that cemented Imperial Triumphant's new identity, earning them much more attention than previously and catapulting them farther into the heights of underground metal stardom. Now, in 2020, they seek to capitalize upon that wave with Alphaville.

And capitalize, Imperial Triumphant certainly do. While it may seem difficult in theory to successfully follow up an album as massive and expansive in its songwriting as Vile Luxury, this is exactly what Alphaville brings to the table. Part of the reason it still sounds so fresh despite not being too out of sync with its predecessor is inevitably owed to the large palette of sounds and styles Imperial Triumphant call forth in the first place, which provides much room for additional exploration of previously untapped territory. For the most part, however, on Alphaville the band stay grounded in their peculiar, wobbly fusion of black metal and tech death, painting vivid pictures of the decadence of present day urban sacrifice with razor sharp, intricate guitar lines, a phenomenal rhythm section, and a broad production sense that leaves absolutely nothing to the imagination.

But while it may have slight similarity to previous iterations of Imperial Triumphant's own work, Alphaville still carries very little resemblance to practically anything else in the extreme or Avant-garde metal spectrums. In part this is unquestionably owed to Imperial Triumphant's unstoppable combination of bassist Steve Blanco and drummer Kenny Grohowksi, both absolute masters of their craft who go 110% in with their respective instruments. Additionally, and perhaps most importantly, few other Avant-garde, extreme metal bands can truly say that they nail the fusion between punishing and hypnotizing as well as do Imperial Triumphant, an aspect of the band that has arguably come to its peak with Alphaville. Here you get absolute bangers like "Excelsior" and "Atomic Age," where the metal elements are more at the forefront, as well as slow burners like "City Swine" and "Transmission To Mercury," that allow the more experimental elements to take command. Few other bands are able to nail both sides of this proverbial coin as excellently as do Imperial Triumphant.

Vile Luxury was a dense as hell, amazingly well written, and altogether challenging listening experience that, for all intents and purposes, seemed like an absolute bitch of an album to follow up on. But with Alphaville Imperial Triumphant have not only tapped back into the creative momentum that spawned Vile Luxury, but also appear to have gone beyond it, somehow making their idiosyncratic sound even more puzzling, layered, hefty, and captivating. 100 years after the so called "Roaring 20s" got underway, Imperial Triumphant are bringing back the extravagances and artistic boldness of that decade in their own way. And with Alphaville, they're certainly starting the 2020s off with a roar.

Now streaming at this location. For maximum experience, play the album in the background while watching the Jean-Luc Goddard film for which it's named on mute.

Written on 01.08.2020 by
Apothecary
Comforting the disturbed and disturbing the comfortable since 2013.
More reviews by Apothecary ››