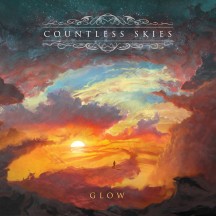 It's not very uncommon to have a band take its name from another band's song or album. Motörhead spawned Overkill and Sepultura (through the translation of "Dancing On Your Grave"). Gorguts's Obscura spawned Obscura. Even Immortal's "Enslaved In Rot" spawned Enslaved. But in each of these cases the bands took some inspiration from the original's sound but ended up creating their own. Countless Skies taking their name from the Be'lakor song of the same name, are a bit slower at the "creating their own sound" part, but Glow finds them in a better position to do so than New Dawn.

It should probably be some sort of weird coincidence that Countless Skies released their debut album on the same day that Be'lakor released their last, but having some Be'lakor lite to keep our thirst quenched until the real thing arrives wouldn't be such a bad thing as long as Countless Skies rise up to the standard. Of course, Be'lakor isn't the worst place to look for inspiration, even if New Dawn was a bit too close to their sound for me to comfortably listen to it. Glow amplifies that one aspect of Countless Skies that always differentiated them from their obvious origin, namely their dual vocals. And it's not only that, but there are now a lot more moments where I don't instinctively feel like I'm listening to Be'lakor lite.

In fact a lot of the album now sounds a lot closer to the Finnish side of progressively tinged melodeath, with bits of Insomnium, Amorphis and Omnium Gatherum, and even deeper into the prog territories there are some traces of Opeth and Borknagar too. None of this feels like it breaks any actual new ground for the genre, but it definitely breaks a lot of ground for Countless Skies. And it turns out that they were actually very competent musicians in the first place, but that was already obvious if they were previously able to stick so close to Be'lakor's sound so competently to still garner interest. And now that paid off. They learned from the best, and Glow takes that into a more mature and personal direction.

It still partly feels like a stepping stone, but if it promises to elevate Countless Skies to proggy melodeath royalty, I'm definitely more invested in them than I was before hearing this. It already sounds like the record of a band with multiple years under their belt, from the bombastic production to them being able to write songs this long (even dividing the title song into three tracks) without any of them feeling overstretched. It is the title track that oozes the most of Opeth especially with the inclusion of mellotron and the pummeling riffs. But even if there are still a lot of moments that make me think of other bands, Countless Skies grew so much as musicians that I can't help but be won over by how great this whole blend sounds, as much as I am most compelled by the moments in which they sound like no one but themselves.

Honestly it's gotta be pretty hard for up-and-coming melodeath bands, they can't get away with aping their influences as easily as thrash or death metal bands often do, so maybe I'm being unfair to them. Most of those rehash bands wish they would have the skills of Countless Skies. But I don't really expect thrash metal to inovate anymore. Countless Skies instead might actually find some way to do so in the future.

Written on 06.11.2020 by
RaduP
Doesn't matter that much to me if you agree with me, as long as you checked the album out.
More reviews by RaduP ››