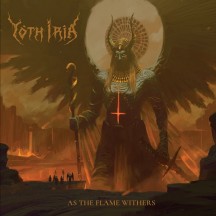 
It wasn't enough for Yoth Iria to surprise us with one of the best EPs of 2020; they also had to release exactly twelve months later one of the best melodic black metal albums you'll be lucky to listen to this year, in the form of a debut full-length.

Spearheaded by the founding members of Rotting Christ and Necromantia on bass and vocals, and further bosted by VIP members of the Greek extreme metal scene on guitar and drums (more info on the line-up in this review), Yoth Iria is an old recipe delivered in a fresh and engaging package. True to the ethos of Hellenic black metal, As The Flame Withers is an album of dark, epic and atmospheric black metal that is also chock full of melody and warmth (yes, warmth). This type of Mediterranean-originating black metal is not forged by the cold winds blowing over frostbitten lands like its Scandinavian counterpart, but has a certain kind of warmth and mysticism that envelops you - or slowly plunges you to the fiery depths of hell, depending on how you look at it. Listening to it feels like you are taking part in a process of initiation to the Hellenic black metal cult. This effect is achieved by both the production choice, as well as the actual music itself which is very ritualistic but also distinctly melodic and accessible.

As The Flame Withers is, for the most part, doomy, gloomy, slow-burning, and occult. Only the opening track and the first-revealed single, which was also included in last year's split release with Kawir, are rather fast-paced and menacing. "The Great Hunter" boasts an intro that is one of the most memorable you are going to listen to this year and the song stays gripping until the end, while "The Red Crown Turns Black" is stellar black metal incorporating Burzum's synths and Iron Maiden's melodies. The tracks between these two are equally, if not more, captivating but adopt a slower, esoteric, and - therefore - more immersive approach. My favourite is "The Mantis" due to its Triarchy Of The Lost Lovers vibe and The Magus's vocals that are at their most convincing Abbath/Dagon mix on this song.

My only gripe with the album is that both "Unborn, Undead, Eternal" and "Tyrants" feel somewhat underwhelming, compared to what precedes them. Granted, the first five tracks are top tier black metal but these two really could have been part of the last couple Rotting Christ albums (so not the best Rotting Christ albums). Fortunately, "The Luciferian" is a more than deserving closer; especially its second half gives me the chills because it has Passage To Arcturo written all over it.

This phenomenon of members of the old guard pairing with the younger guns is an experiment that worked for Katavasia and it seems to be fruitful for Yoth Iria too. The Hellenic black metal sound now proudly carries a 30-year history on its back, but bands like these are sure to keep the fire aflame for a lot longer.