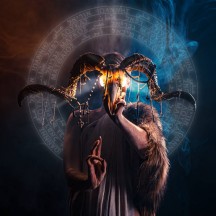 
Call me Ishmael, and I'll rip your fucking face off.

Heliocentric is a one-man djent/progressive metalcore band masterminded by Jared Smith. If reading 'one-man djent-core band' is making you feel antsy, you have my permission to leave, as this isn't a revelatory rendition primed to convert naysayers. For those of us that do enjoy this sound, Ishmael is the second full-length album released under the Heliocentric name, and Smith has stated that the album was made as his senior thesis project in college as an exploration of the violent interactions between the three Abrahamic religions. I love the sound of submitting a concept album as a thesis instead of the dissertations I had to write at university, and I have to say I also love the sound of Ishmael.

One-man bands are by no means a novelty in metal, but they're primarily associated with lo-fi black metal projects, where some amateurish on the production front is to be expected, perhaps even encouraged. Djent and metalcore are not styles that sit well with amateurish production, but Smith is more than capable of reaching the standards required for the style played here. Ishmael is credited as being performed, mixed and mastered by Smith; I have to say, as someone who's recently gone through the process of creating an album myself, the idea that one individual could compose, perform all parts, sing/scream, record, mix and master an album that sounds this good all by himself absolutely blows my mind. The sound here is crystal clear, with the instrumentals and vocals all balanced so that everything that needs to be heard can easily be done so. There's also a lot of force to the low end, with is pretty much essential for djent music; those crunching riffs in the lowest registers hit like a freight train. Whatever else one might say about Ishmael, it's not an album where raw musical potential is undermined by a sub-par production.

It's also not an album that's limited by the technical skill of the musicians involved. This technically and rhythmically complex style requires top-level musical ability, and that's on display here, with impressive guitar lead work and polyrhythmic assaults delivered with aplomb. Smith also does both extreme and clean vocals here, and whilst he's not going to be a genre-leading clean vocalist, he's more than capable of delivering what's required here, and pairs that clean ability up with some strong screams and occasional gutturals. This is a one-man band where the man in question is highly adept across all technical aspects of creating heavy music (to the extent that I'm wondering if there was another person involved at some stage and I just can't find a record of who); so, does his songwriting live up to all this talent?

I've spun Ishmael several times now, and I have thoroughly enjoyed it, increasingly so with each subsequent listen. One of many things I enjoy about the album is how well Smith utilizes interlude pieces, which can have a tendency to feel superfluous; in contrast, the likes of "Threnody For A Burnt Offering" and "One" positively contribute to the flow and atmosphere of the album, whilst "Moriah" sets the scene effectively with its imposing percussive march and triumphant synths. "Gabriel" sets the album's stall out early on with its gnarly low-end chugs, complex rhythms and solid clean/harsh vocal interchanges, reminding me of some of Polaris's best moments given a visceral djent makeover, and definitely bringing moments from Monuments's debut record Gnosis to mind. The song also nicely shows off some of the ambient elements that are intelligently utilized in the background of many songs here.

"Gabriel" is a fairly bludgeoning opener; "Whispers" leans more to the melodic metalcore side of things, with its memorable opening keyboard melody and blissful guitar leads; at the same time, the powerful low-end rolls and syncopated grooves highlight what advantages integrating djent into a melodic metalcore sound can bring when compared with bands firmly rooted in the latter camp. I would say pretty much every song here is enjoyable; some of the moments that particularly piqued my interest during playthroughs were the guitar theatrics towards the end of "Never Again", the World music vibes and atmospheric drumming in the intro of "Rung", and the melancholic tone of "Ululate".

I'm trying to think of obvious weaknesses here; obviously this sound is by no means for everyone, but for those with a taste for modern technical metalcore, particularly with a djent-heavy spin, it offers pretty much exactly what one could hope for from an album in the style. There's room for improvement with the memorability of some of the vocal melodies perhaps, and other refinements could take Heliocentric right to the Periphery II/The Amanuensis peak of the subgenre, but Ishmael is already at the level just below, alongside albums such as Gnosis or Erra's Augment. Rounded off strongly with a reprise of "Moriah" by way of closing track "Thicket", Ishmael really is an excellent, concise, thrilling exhibition of what the sound that I mentally refer to as djent-core can offer.

Written on 16.02.2021 by
musclassia
Hey chief let's talk why not
More reviews by musclassia ››