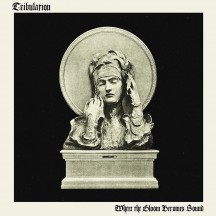 
Tribulation have been one the most exciting Swedish exports of the last twelve years. From their early deathly brutalities to their most recent gothic horrors, these guys have had a streak of sensational albums. Where The Gloom Becomes Sound is another sensational album, shrouded in thick fog and wearing black eyeliner, much like its predecessor.

And what a great album title they chose for this one. Tribulation may have borrowed it from Sopor Aeternus (the title is a line from the classic "Hades 'Pluton'"), as Adam Zaars admitted in this interview but it really fits their sound like a glove. Whatever you may want to call that sound - be it 'gothic metal' or 'gothic death rock' (as Johannes Andersson has called it) or even 'Fields Of The Nephilim and Moonspell jamming '80s heavy metal songs in 2021' - Where The Gloom Becomes Sound is a logical continuation of what started with The Children Of The Night, evolved with Down Below, and now seems to have become the band's fixed style of choice with this latest offering.

The record is roughly divided in two parts with side A being the more atmospheric one and side B the more rocking one, although both characteristics are found in almost all songs. The two sides are divided by a beautifully melancholic instrumental interlude, called "Lethe" (from the word 'Λήθη', which means 'forgetfulness' or 'oblivion', and was also one of the five rivers of the Underworld of Hades in Greek mythology). Interludes are generally lame but this is actually one of the most standout moments of the album.

The mythical, magical, and cinematic character is manifested from the opening track, "In Remembrance", with its suspense-inducing use of keyboards and the electro/industrial type of drumming, and it goes on with "Hour Of The Wolf" borrowing its title from an Ingmar Bergman film. The next two tracks, "Leviathans" and "Dirge Of A Dying Soul" are big favourites due to their spectacular melodies, with the former being more upbeat and instantly catchy, and the latter posing as fairly mysterious and depressive.

An interesting observation is that the band seems to incorporate more traditional heavy metal elements and that may just become an even firmer addition in the next album given the fact that Joseph Tholl (ex-Enforcer) has replaced Jonathan Hultén who left the band before this album's release. For now though, this love for heavy metal is more apparent in the second half both in an urgent delivery ("Daughter Of The Djinn") as well as in a more epic presentation ("The Wilderness"). And then there is also "Funeral Pyre", whose main riff carries serious "Bark At The Moon" vibes.

All in all, there aren't many innovations here compared to what we heard on Down Below; in fact, this is the first time that Tribulation release something that sounds extremely similar to its predecessor. This one maybe comes across as a little more mainstream and accessible though; so, imagine Ghost's progression but without the dip in quality.

It will be interesting to see where Tribulation will go from here since the departure of Jonathan has seen them lose not just one of their two guitar players but, more importantly, their main songwriter since this album was largely written by him. But that is future talk. As far as the present is concerned, Where The Gloom Becomes Sound is a monument of gothic darkness and electrifying heavy metal played by the creatures of the night.