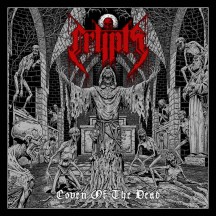 
It's always nice to see bands from the Clandestine Cuts articles graduate to the front page, especially a former Staff Pick winner.

Crypts's Promo / Demo featured stiff competition from the likes of Lamp Of Murmuur, Undeath and Sanguisugabogg when featured in the December 2019 edition of Clandestine Cuts, but it impressed enough to not only feature in the end-of-year Metal Storm Awards, but receive the Staff Pick for Best Clandestine Cut. A bit over a year later, the German death metal outfit have the opportunity to demonstrate how that early promise translates across a full album with their debut record, Coven Of The Dead. So, how does it stack up?

For those that missed the band's feature in Clandestine Cuts (shame on you), Crypts play death metal, and they play it very much in an old-school manner. Across the first four songs on the album, you get relentless buzzsaw riffing, evil frenetic solos, dirty mid-ranged growls and drumming that covers all the expected notes in the OSDM drummer's playbook. Kicking off with "Hallucinations", one of the two songs that featured on the 2019 demo, Coven Of The Dead wastes no time before sliding into a chunky mid-tempo riff, then kicking off with a very classic OSDM attack. Perhaps the strongest of these first four songs is "Deathking Coronation", featuring an attention-grabbing guitar solo on and an unstoppable assault of tremolo buzzsaw riffing.

These four songs are perfectly enjoyable OSDM; however, they deviate not one degree from the sound's extremely well-trodden path, following in the footsteps of over 30 years of pioneers and copycats. Given how done to death this sound is, what do Crypts offer that caused them to stand out with their demo? The answer lies in the other song featured on said demo, "Paura". Closing off the album, this tracks doesn't seem to differ much from the others to begin with; however, it runs 2 minutes longer than the next-longest song on Coven Of The Dead, and it uses that extra length to expand from the standard OSDM into altogether more exciting territory. An early-song acoustic guitar detour (accompanied with creepy children's chanting) offers a glimpse at the ambition that will be exhibited later on, as at around the 4-minute mark, just as the other songs would be wrapping up, Crypts move into an atmospheric dirge, with background Gregorian choirs, melancholic guitars and passionate roars combining to give Coven Of The Dead an epic climax.

"Paura" ensures that this debut record finishes in spectacular fashion; however, this brief venture into territory outside of OSDM cliches only highlights the lack of diversity across the rest of the record. The one other major exception is the title track; between the eerie synths that serve as the backdrop to the track, the acoustic guitar backdrop to the verses and doomy chorus, it stands out heavily from the rest of the tracklist and highlights what Crypts are capable of when they expand their horizons.

Between "Coven Of The Dead" and "Paura", Crypts demonstrate that they're capable of being more than just a good OSDM clone; I really hope that they can continue to explore avenues such as these on subsequent records, as these tracks show real potential. As it is, Coven Of The Dead is a promising debut, but one that, outside of those songs, shows off Crypts as a very competent but very generic death metal band.

Written on 28.03.2021 by
musclassia
Hey chief let's talk why not
More reviews by musclassia ››