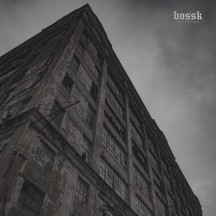 
Hardly the most prolific studio band, Bossk compensate for the infrequency and slimlined nature of their releases with reliable good quality.

Anyone who's been to a post-metal gig in the UK in the past decade had a good chance of seeing Bossk as one of the supporting bands, and many more outside of the UK are likely familiar with the band due to the origin of their name (a bounty hunter from Star Wars). However, despite having formed over 15 years ago, Migration is only their second full-length record; two highly promising early EPs were followed by a four-year hiatus, with the band only dropping their debut record, Audio Noir, in 2016. With less than 2 hours of music committed to tape in 15 years, Bossk have very much made their reputation as a live band, but Migration sees the band offering slightly more of themselves to the public in studio form.

A major point of note on Migration is the absence of vocalist Sam Marsh on the record; the reason for this absence is not entirely clear, as Marsh is still a member of the band, but it does have a substantial impact on the record. The album is mostly instrumental, although it does feature Johannes Persson of Cult Of Luna and Josh Mckeown of Palm Reader as guest vocalists on "Menhir" and "HTV-3", respectively (several members of Endon also contributed to the album, including the sadly departed Etsuo Nagura).

The inclusion of Persson is quite fitting, as when looking for reference points for Migration, the easiest comparison to make is with Cult Of Luna, specifically their Vertikal era, as well as the sonically similar The Moth Gatherer. Persson's roars, combined with the trudging metallic stomp of the beginning of "Menhir" and the atmospheric electronic layers on the song, not to mention the monochrome artwork, make comparisons with Vertikal almost unavoidable. The comparisons aren't so glaring outside of this song, although the electronic-only introductory track "White Stork" gives off similar vibes.

"White Stork" is one of three tracks on Migration that fall into the 'interlude' category (albeit this one opening the album), alongside "Iter" and "Kibo", meaning that there's effectively only four 'proper' tracks on Migration. Of these, "HTV-3" is the most up-tempo, with the driving rock riffs in its heavier moments calling back to previous Bossk songs like "Atom Smasher" and "Pick Up Artist". Mckeown's mixture of screamed and clean vocals offer an interesting dimension that is otherwise missing on Migration, but the song still naturally follows the heavy/soft template of post-metal.

"Lira" is the longest song here, and the one that perhaps explores furthest into those heavy and soft possibilities; uplifting post-rock tremolo, subdued bass-driven downtime and electronic ambience are countered by slow, dense, stomping metallic trudges, with a particularly bruising one encountered about two-thirds of the way through. "Unberth" never approaches these depths; instead, this song explores lighter textures with a mixture of noise, ambience and post-rock instrumentation giving the album a soft yet captivating conclusion.

Migration is on the whole a solid effort; as a big Cult Of Luna fan, the Vertikal worship on "Menhir" is right up my street, whilst "Unberth" is a really compelling ending to the album. However, the album on the whole does feel a bit lightweight; whether it's the lack of Marsh's vocals, or the fact that over 10 minutes on a 40-minute album are taken up solely by interlude-style segments, but whilst I enjoy Migration, I do find myself left slightly unfulfilled when the album is finished, particularly since it's been a whole 5 years since Audio Noir. I believe the album would've definitely benefited from an additional full song to flesh it out a bit more; still, I don't have any real complaints about the material that did find its way onto Migration.

Written on 20.06.2021 by
musclassia
Hey chief let's talk why not
More reviews by musclassia ››