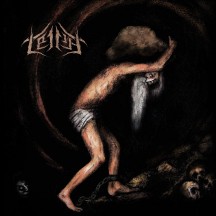 
So now the guy behind Kanonenfieber has two great projects!

You might remember Kanonenfieber both because the artwork has been floating around, because some people mistakenly think it's glorifying war (always a bad look in Germany) instead of damning it, and because nik reviewed it. Leiþa's Sisyphus also has a pretty attention grabbing cover art, but I don't deny that it's the Kanonenfieber connection that got me interested in it. I already knew the standard of quality to expect, and Sisyphus pretty much matches that.

It would be impossible not to compare and contrast this to Kanonenfieber. And indeed sound-wise it's quite clear that they come from the same artist, with it's very direct and creatively melodic way to create pummeling black metal. Naturally, Leiþa dials down the "war metal" tendencies into something that is a bit more focused on a different nuance of negative emotions. From the horror of war to the dread of self-loathing ("Leiþa" supposedly meaning "Suffering" in Old German), hence the mythological imagery. I admit that I haven't properly read the story of Sisyphus so my pop myth knowledge of him as the endless boulder guy might lack nuance, but at least what I can tell is that one must imagine the listener of this album as happy.

For something that is based on a myth of endless repetition, Sisyphus is pretty far from repetitive. Noise's approach to songwriting is actually pretty progressive and intricate, to the point where it can feel a bit jazzy too. And somehow it manages to make that complexity feel very direct and upfront. This is far from the most intricate or the most pummeling or the most atmospheric or the most emotional black metal album out there. But it strikes an amazing balance in using these elements with clever songwriting and effective performance. The production is the only part where it feels like some recording/mixing choices drag the album a bit, but they're far from being too distracting for me.

Though I feel that without taking the cover art and the lyrics into account it's pretty hard to get the same emotional weight through the music alone (as in: the album doesn't really sound like suffering) and to separate it sound-wise from its companion project, the music on display is absolutely fantastic black metal within its own niche.

Written on 06.08.2021 by
RaduP
Doesn't matter that much to me if you agree with me, as long as you checked the album out.
More reviews by RaduP ››