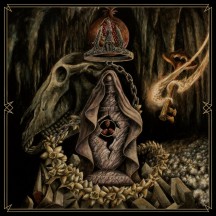 
01. Opprobrium
02. A Stain Upon Celestial Rule
03. Abducting The Seed
04. Descent Into Ruinous Splendor
05. Scorching The Wings Of Destiny
06. The Whorish Arrogance Of Immortals
07. To Salvage The Seed


I think we've underestimated the Swiss. You were supposed to be neutral!

You might remember from my review of Ungfell's latest album that I did quite lament my hitherto lack of interest in the swiss scene outside of the Darkspace and Co. groups. But the the "Helvetic Underground Committee" came along. My first encounter was, then unknowingly, Death. Void. Terror.'s To The Great Monolith and Ungfell's Mythen, Mären, Pestilenz, another batch of albums I regret not having the mental bandwidth to review. However the latter was followed up by Es Grauet, which increased my interest enough for a review, which was a good opportunity for me to dive deeper. Needless to say, I was pretty excited for the new Lykhaeon album.

But full disclosure ahead. I have not listened to any other Lykhaeon album, and I've latched on to this one because the band is now a due that includes an Ungfell member (and a session drummer). But then again, the Bandcamp page mentions that "this is the first - and thus far only - release that sounds how Lykhaeon should sound." So I'll take their word for it and instinctively draw more parallels to Es Grauet than to Tanz Der Entleibten. And though they're both black metal albums, they couldn't be more different. Well, they could be, but the differences are staggering. To put it simply, Opprobrium is dense, haunting, ritualistic and ominous.

With Greek mythology once again taking center stage as lyrical theme, specifically the story of Hades kidnapping Persefone, Opprobrium's spin on the myth is one that showcases a mystical gloom to it. There's an immense attention to detail in the textures and the melodies on this record, along with its dual vocal approach from the two members, and the extra instrumentations and choirs, so that, even with some uneven mixing at times, it manages to create a truly enthralling atmosphere. There are plenty of moments where the pummeling takes a full-stop to allow for some droning ritualistic ambiance that somehow never releases the gathered tension. "Tense" is a really fitting word here.

There are plenty of death and doom metal influences seeping in, both of them in terms of how extreme metal relates to its oppressive atmosphere, so think Teitanblood and Shape Of Despair. Each of them blended into a concoction where being oppressive takes precedent over anything else. I've already mentioned the "full-stop" moments, but every choice from the production to the genre mixture to the riffing seems to indicate the emphasis on atmosphere. It's as hypnotic as you'd want ritualistic black metal to be, where it being pummeling or memorable seem like addendums rather than the main story.

And now, I wish this was not the only release that sounds how Lykhaeon should sound.

Written on 06.08.2021 by
RaduP
Doesn't matter that much to me if you agree with me, as long as you checked the album out.
More reviews by RaduP ››