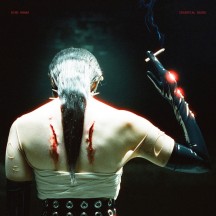 
You may think that you don't need another album about Lucifer, but you do.

Kristina Esfandiari is a woman of a lot of projects. Some of which didn't even yet release a full length. But throughout her work she did death industrial as NGHTCRWLR, ethereal dream pop as Sugar High and as Miserable, industrial hip-hop as Dalmatian, a brief membership in shoegaze band Whirr, as well as a bunch of guest appearances. But regardless of all of these, Kris will always be King Woman first and foremost to me. Which is also ironic because she is the part of King Woman that I still have to properly grow into. I mean, the moment you hear Kris' vocals here, you know that there isn't anyone is the scene that really sounds like her.

The sound of King Woman was always a sort of stonery sludgy doom metal with massive indie tinges. That's pretty much what propelled Created In The Image Of Suffering into an instant classic status and created such a wide crossover appeal. What Celestial Blues does is make the blend of occult doom and indie take the sludgy leap deeper into post-metal territories, while also brewing everything into a mix of a sound that is more fully integrated. Though comparisons to acts like Chelsea Wolfe, Emma Ruth Rundle, Darkher, Blood Ceremony and Windhand might still be valid, this one feels like it has much more than Kris' vocals to latch on to for the uniqueness of its sound.

Speaking of indie sensibilities, is it a surprise considering Kris' other projects that the album oozes of grunge, shoegaze, post-rock and alt rock throughout. Hell, at times this feels closer to being a 90s alt rock album than a doom metal one, with songs like "Coil" feeling pure 90s. In a way this is more of a "doom metal for people who listen to indie" rather than the other way around. To be expected from a band that also released an amazing cover of "I Wanna Be Adored". Kris' vocals move from harsh shrieks, punky shouts, lullaby whispers, melancholic crooning to match the extended sound palette, but her vocals are still distinctively divisive. I can't say that I love them, but I can easily see them being perceived as either a "tour-de-force" or as "terrible". That might also be tied to how much indie one prefers in their metal.

A lot of the album is captivated by the vocals, so there is a bit of a tendency for the instrumental part to feel like it acts like just a support for those. Sure, hard to compete with vocals like that, and the instrumentals sure do their job in supporting them, but the album wouldn't be half as good without those grooves and walls of sounds. The album as a whole seems a bit less reverb-heavy than its predecessor, instead opting to leave out a bit more space in the mix. Though the use of biblical allegories intertwined with personal experience is nothing new, and I'm not really the best person to ask to dive into lyrics, I did enjoy what I managed to grab onto.

Whether this is overhyped Pitchfork-tier nonsense or a doomgaze classic in the making doesn't really matter much to me. I'm just waiting for the day when I Kris' vocals properly grow on me.

Anyway, here's a fan video of Kris performing Fleetwood Mac's "The Chain" with Thou. And the mandatory album Bandcamp embed:

Written on 09.08.2021 by
RaduP
Doesn't matter that much to me if you agree with me, as long as you checked the album out.
More reviews by RaduP ››