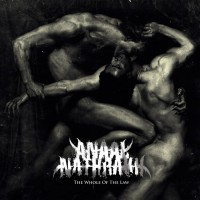 
As with previous Anaal Nathrakh albums, this record begins with such brutality right from the start, and could not begin with a more menacing opener. It's clear that, after the first few tracks, this is going with the same theme as Vanitas, in terms of aggressive lyrics and the outrageous song titles, and like Vanitas, the cover art is deeply disturbing; I'm not quite sure what it depicts, homosexual cannibalism?

It's hard to describe a particular genre for this album; the element of black metal is still there, probably more blackened than previous albums, and less of the grindcore, but with this album there is an apparent difference in the sound. The introduction of the symphonic vocals in the background is a big one; it gives the record a darker and more disturbing atmosphere than previous albums, and with this they also took a more Industrial and synthetic approach to their sound. Even by Anaal Nathrakh standards, this new approach sounds even more chaotic.

The harsh vocals are intense as usual, with uncomfortable, brutal screams, and with such raw emotion, capable of giving an easy listener a severe headache! This, to me, is exactly what this high end of extreme metal is all about, and I absolutely love it! But with all this brutality, you will hear clean vocals being used for the choruses; the clean vocals are a simple touch, but make such a huge difference, as it breaks up the chaos and adds a touch of melody.

"Hold Your Children And Pray For Oblivion", "On Being A Slave" and "So We Can Die Happy" are some of my favourite Anaal Nathrakh songs, as well as the opening two tracks; although some songs may seem slightly weaker, there is no song here weak enough to seem out of place or affect the overall consistency of the album.

If anyone was to ask me what I would consider the heaviest album to be, then this album will be up there, at least based on what I consider in terms of heaviness.

To quickly summarise this, it's intense, it's brutal and has a ferocious tempo, and may not be for the faint-hearted; if you're new to Anaal Nathrakh and this kind of metal, then you might find listening a bit hard-going first time round. However, it surprisingly may have the potential to grow on you If you allow it; if you enjoyed Vanitas then there should be every reason for you to like this one.