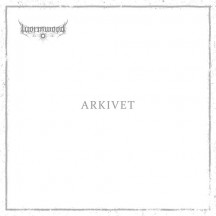 
Wormwood, no, not Wormwitch. Those are the Swedish master blenders of atmospheric black, melodic black and anything that seems to fit in who also brought you the excellent Ghostlands - Wounds From A Bleeding Earth. Now the quintet from Stockholm is conjuring the black moon magick and the spirits of a dying earth to bring forth their third kick ass offering entitled Arkivet (The Archive). If you like your black metal mixed with many genres, you have arrived.

Wormwood deliver melodic black metal while flaunting a post-black attitude. Three key elements from Arkivet become clear early on: Blasting guitars, hyper-emotional vocals and bleak themes. The snarls and bellows from singer Nine are rather special but if you are a fan of the band you already know what to expect. Some choir-like backing vocals add an emotional overtone on many a track, which make for unconventional but satisfying vocal mixes but they do add depth.

The aptly-named "The Archive" starts Arkivet in style. Few metal bands ever managed to evoke Pink Floyd but that is what is happening on the second half of the song with an introspective prog break and classic guitar sound a la David Gilmour (Mark Knopfler also comes to mind). "Overgrowth" has a weird cheery Christmas theme intro despite the dark atmosphere and it follows the same musical patterns as the opener. "End Of Message" follows the same mold while simultaneously conjuring Insomnium in both sound and intention. There is a intrusion of folk melodies on "My Northern Heart", which is a powerful and very catchy track. "Ensamheten" - the only song in Swedish here - has a darker, fiercer atmosphere akin to Moonsorrow and yet it features a violin and a fantastic melodic guitar outro.

"The Slow Drown" is probably the most memorable piece of music on Arkivet due to its mix of influences, and changes in tempo, from straight old school rock to more recent bands such as Dark Tranquillity and Harakiri For The Sky. On the other hand, "The Gentle Touch Of Humanity" is a bit of a mixed endnote. It starts strong as an epic closer but halfway through it features some depressing spoken words and news announcements about the sad state of humanity that might come across as a little corny to some, and mostly it ends up breaking the natural flow of the album. I think they were going for "reflective" but it turned into "puzzling".

Arkivet is a beast with many faces. While the folk elements have been toned down compared to previous releases, the originality and freshness are still very much present. The guitar work stands out especially due to the breadth of influences. Overall the album delivers a lot of well-executed and varied tracks but may fall short compared to Nattarvet or Ghostlands. Wormwood is one of the rare bands who manage to keep melodic black metal fresh and entertaining. Arkivet is definitely a testament to that.

Written on 09.09.2021 by
Dream Taster
Bringing you reviews of quality music and interesting questions such as: