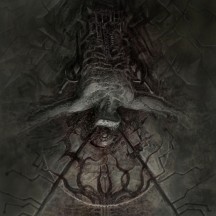 
01. The Conspiracy Against Cruelty
02. Covenant Of The Fallen
03. Fury Divine
04. Disavowed, And Left Hopeless
05. Mdłości II [Mgła cover]
06. From The Noisome Pestilence
07. The Scourge


Don't know about you, but that doesn't sound like silence to me.

With a long band name to crown all long band names, Our Place Of Worship Is Silence (who will be henceforth referred to as OPOWIS), have been around as a band since 2014 and as a duo since 2017. Home to not only the most casually threatening band photo, the duo have also had its stints in the atmospheric black of Lake Of Blood and the grind doom of Teeth, as well as Eric being the current bass player of Xibalba. OPOWIS sounds a bit like what you'd expect to come out such a combination and applied it to death metal. So it's blackened, doomy and hardcore-infused, but that's still not giving you the full picture.

Disavowed, And Left Hopeless is a death metal album. First and foremost. The basis of their sound lies in pummeling drumming, crushing riffs and grotesque growls. Now taken through a filter for extreme dissonance, to make the atmosphere of the album thoroughly nauseating and claustrophobic. Paint it with enough negativity to wither an entire garden. Sink it in murk and replace some of those Morbid Angel-esque riffs with Blut Aus Nord's. Inject it with some grindy hardcore oomph and have it worship some Dragged Into Sunlight. Master it in such a way to take it a wee bit closer to a layer of noise. Maybe now we're getting there in terms of how Disavowed, And Left Hopeless actually sounds like. If there's any better indication, the band transforms Mgła's "Mdłości II" into a behemoth of doom, and that's actually the least intense moment on the album.

Using both sheer brutality and suffocating dissonance to pummel the listener, there are moments where Disavowed, And Left Hopeless feels pretty impenetrable, though not necessarily bordering anything like Pyrrhon or Encenathrakh, while some other moments, like a couple of fadeouts and an awkward solo in "Fury Divine" don't really do well for the album's flow. As far as being misanthropic, ominous, and crushing goes, it's pretty far ahead of most of the death metal I've heard this year. But I'm not sure the songwriting itself really reached the same level as the atmosphere that it builds. The divide is far from that significant, so I can't say that I'm in any way disappointed, just that a bit of cutting would've made it an even bigger maelstrom.

Dissonance and brutality are far from anything new for death metal, but Disavowed, And Left Hopeless gets pretty creative in how to convey extremity using those means. This is death metal for your worst days.

Written on 14.09.2021 by
RaduP
Doesn't matter that much to me if you agree with me, as long as you checked the album out.
More reviews by RaduP ››