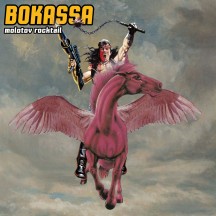 Sometimes I still feel like a teenager. There are times when I don't wanna take out the trash and I just want to play video games all day, but then I remember that I have responsibilities and a schedule I gotta respect. I can still spend most Friday nights downing drinks, but my hangovers are slowly slowly getting worse. My friends enjoy my immature sense of humor, but I'm the more I think about how I was like in high school, the more I internally cringe. But do you know what has been the weirdest indicator that I am no longer a teenager? I no longer enjoy music I would've loved as a teen. And what's even weirder is that I am generally the kind of guy who can appreciate most genres. I'm vibing to most songs that play at any party, but if there's anything that ruins my mood: Guns N' Roses, AC/DC and Bon Jovi. Coincidentally the only stuff I really liked back when I started going to parties.

You get the point. Bokassa falls right into that pit. Or at least, they do on Molotov Rocktail. I didn't just pick a random album and decided that I hate it. Bokassa were one of the bands that I saw opening for Metallica back when I saw them and they completely disgusted me by, out of all the possible Romanian songs they could cover, they covered a song, which is itself an uncredited Whitesnake cover, from a band whose discography is full of uncredited covers. But my experience with Bokassa's first two albums and their performance was not negative, mildly pleasant at best and forgettable at worst. Even now I binged their first two albums to make sure that Molotiv Rocktail hasn't soured my experience of those two. It didn't. But paying closer attention, it's not like it's that big of a difference.

I mean, look at the cover art. Look at that title. If there's one word to immediately take away is "unapologetic". They are Bokassa and they play rock 'n' roll. It's a bit more stoner the way Clutch is stoner and hardcore the way Kvelertak are hardcore. This is the sound that they had since the beginning, but it didn't feel this over the top, so when Molotov Rocktail comes and goes the extra mile, it's like watching a movie and a scene comes along and you cannot suspend your disbelief any longer. It "jumped the shark". One too many "oooo" backing gang vocals. Using a cheerleader choir in this day and age. It's basically all the worst tropes of stadium rock. But why do I find tropes for this music genre ridiculous when I can listen to black metal or death metal with a straight face, when both of those are just as, if not more ridiculous? Why have I trained myself to suspend my disbelief of pretending that Satanism and gore are somehow not as teenage edgy as being unapologetically rock 'n' roll?

I feel like complaining about the "ooo" choruses is staring to feel like seeing melodic metal fans make fun of death metal for "cookie monster vocals". So, negative feeling towards tropes aside, I realized that Molotov Rocktail is actually pretty good at using, or overusing, those tropes. As annoying as I found them, most of the choruses did get stuck in my head, and I realized that I didn't necessarily find them as obnoxious. There's some wit to the unapologetic obnoxiousness, there's some punch to the guitar riffs, and a lot of those choruses could be refactored into something really hard-hitting. But alas, I'm too sober for this, in its current shape.

I had a phase where I really disliked thrash metal and then I went I saw Slayer. I had a blast. All that I can hope is that there will be a time when I can listen to music like this without being reminded how much I don't like the kind of person I was when I was younger. Once that happens, I'm pretty sure Molotov Rocktail is due another spin.

Written on 20.09.2021 by
RaduP
Doesn't matter that much to me if you agree with me, as long as you checked the album out.
More reviews by RaduP ››