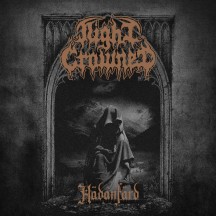 
Night Crowned is a new band that has emerged from the everbearing melodic black metal tree of Sweden. They have members of Cipher System and Dark Funeral in their ranks, so it comes as no surprise that seasoned musicians have created such cohesive and enjoyable albums in the form of Impius Viam in 2020 and Hädanfärd earlier this year.

Unlike its predecessor, Hädanfärd is a totally Swedish affair in terms of song titles and lyrics, so very few of you will be able to understand what these songs talk about. Nonetheless, almost all of you are expected to appreciate the unyielding melodic assault that this album delivers.

The first time I listened to Hädanfärd, I faced the same problem I had with Kvaen’s debut (described here); I just could not get past the opening track. “Nattkrönt” is a songwriting triumph, full of dynamics and melodies and even breakdowns that are absolutely captivating; it is super heavy and brutal but also atmospheric, and dark and foreboding. And frankly, the whole album is mostly like that, balancing between relentless aggression and hook-filled melody, with brief moments of mood-setting bleakness.

The spirit of Dissection permeates the album, which is expected really, and at times I get the impression that I am listening to a more melodic version of Dark Funeral. Hädanfärd is cleanly produced and sounds lush, with the lead guitars playing a dominant role, not so in the form of solos but more in the omnipresence of enchanting melodies, while there is also an abundant use of keyboards providing a gothic/symphonic touch and making the overall feel of the album more gloomy and sombre. Vocally, there is a wide range of harsh vocals and there are also some cleans here and there; actually, the cleans heard on “Rex Tenebrae” are a bit of a surprise, sounding more like vocals you’d hear in a mainstream rock song. Janne Jaloma of Aeon and Dark Funeral fame is a total beast behind the drum kit and sets the pace for every single thing that is happening on this album.

Hädanfärd is smartly conceived and well executed, and it blasts from start to finish. For criticism’s sake, I could say that there is a relative lack of diversity in terms of songwriting and maybe this is why after many listens I am still under the impression that the first half of it up until the title track - which is an acoustic interlude - is stronger than the rest. In any case, if you like your melodic black metal to be slightly gothic-peppered but turbo-boosted with strong doses of death metal battering, you should try this one out.