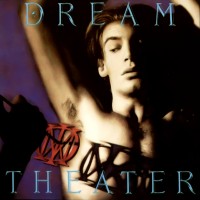 
1989, the date of birth of the biggest progressive metal band ever is set with the release of their first full-length album, nicely entitled 'When Dream And Day Unite'. Dream Theater is hailing from New York, NY and its lineup is then Mike Portnoy [drums], John Petrucci [guitars], John Myung [bass], Kevin Moore [keyboards] and Charlie Dominici [vocals]. This album is probably not their best release but as we're going to see, it features still incredible stuff, especially if you consider again that we are in 1989 and progressive as only known with progressive rock bands such as the mighty Rush and others.

First released as a vinyl, this album has been reissued on CD format by MCA Records and that's what we are talking about. I'm not sure whether at as been remixed or not, so let's just say that this review is about the CD format of 'When Dream And Day Unite' and not the vinyl format. The production is typical of the 90s and that's fine with me since it makes me nostalgic and it also proves that these songs were actually written and played in 1989? Incredible? Yes.

That point cleared, the track list is composed by eight songs among which 'The Ytse Jam' is probably the most famous, especially because it has been player on several live albums afterwards, but maybe also because it's clearly the heaviest and most progressive track on the whole release and it deserves the title of first progressive metal instrumental song. The technical frenzy of the quatuor Portnoy, Petrucci, Myung and Moore is simply breathtaking and would inspire lots of other musicians back in the early nineties.

'A Fortune In Lies' is an incredible opener as well and it's also my favorite track on the entire album. Portnoy is majestic while the duo Petrucci/Moore is in musical trance. Myung shines too whereas their first singer Dominici is not bad at all, despite his style more toward pop-rock than metal. The solos are incredible and no wonders this album must have inspired lots of people then!

'Status Seeker' is something amazing too, in spite of its "hard rock FM feeling" [partially due to Dominici voice]; especially when Petrucci decides to unleash one of his famous solos like it's nothing. The chorus is damn catchy and Portnoy is already proven to be an exceptional drummer.
'The Killing Hand' is a long and splendid composition originally composed by five sub parts. Each of them is wonderful and this song is with 'The Ytse Jam' the closest song to what would then follow in terms of composition for Dream Theater [I'm talking about the album "Image And Words" release in 1992]. 'The Killing Hand' is definitely worth listening to, especially if you're a musician, you'll see what composition is all about. On that one, Dominici is really good and I can't imagine somebody else singing that one better than he does.

'Light Fuse And Get Away' is a tremendous mix of progressive influences and heavy rock, all gathered by excellent keys, courtesy of Kevin Moore. It has also almost a dark feeling, dare I say, with its complicated structure. As usual, the level of musicianship is totally out of reach for common mortals. The parts that come after choruses are mesmerizing pieces of music; and personally, a view of what Pink Floyd would have been as a metal band.

'Afterlife' is another of my favorites with that thundering guitar solo in the middle, that joyful melody and it also features the best chorus on the album. On the other hand, 'The One Who Help To Set The Sun' is the weak link. Despite a very good atmospheric beginning, the song slips into a too complicated structure so that the vocals and the music don't match really well in the end. Finally 'Only A Matter Of Time' is like a brother to 'Afterlife', same spirit, almost same quality.

Even if the album sounds old and is typical of this early 90s production, "When Dream And Day Unite" still impress by its technical aspect, its originality and the more I listen to it, the more I'm incline to discover new groundbreaking elements. While it's not an essential for the fans of the heavier sound of Dream Theater's music, "When Dream And Day Unite" is truly a unique piece of history for lovers of that element that makes the album "Images And Words" so special.

Written on 10.01.2004 by
Dream Taster
Bringing you reviews of quality music and interesting questions such as: