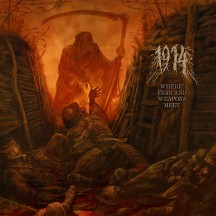 
When you’re a heavily World War I-themed band, it’s hard to top releasing a record on the centenary anniversary of the Armistice. Thankfully, even after the gimmick has peaked, 1914 have more left in the locker musically.

1914’s sophomore, The Blind Leading The Blind, was clearly intended as a breakthrough statement, given the date of its release, but they backed up the attention-grabbing circumstances of its release with an emphatic blend of black- and doom-infused death metal in order to capitalize on these circumstances. The Blind Leading The Blind was something of an underground hit, so there’s now some actual anticipation for Where Fear And Weapons Meet, on which 1914 effectively consolidate the sound that they already established.

Anyone who liked The Blind Leading The Blind should at least somewhat enjoy Where Fear And Weapons Meet, as various aspects of that record are carried over to here. This ranges from the core sound, namely predominantly mid-tempo death metal riffs in the vein of Bolt Thrower accentuated with bursts of black and/or death metal aggression, through to the use of songs and samples from around that time period. For examples of these, you can see the tracks bookending the record; “War In” features a crackling recording of Serbian song “Tamo Daleko”, whereas “War Out” closes out Where Fear And Weapons Meet with a similarly old-timey rendition of the American anti-war song “I Didn’t Raise My Boy To Be A Soldier”. Even the names of these songs are carry-overs from The Blind Leading The Blind, which also opened and closed with a different “War In”/”War Out” pairing.

So, much of what is featured on this record will be expected from previous listeners of the band. If you’re looking for a doomy mid-tempo trudge of a song, see “Vimy Ridge (In Memory Of Filip Konowal)”; if instead you’re searching for some more blackened fury, the explosive opening riff of “Don’t Tread On Me (Harlem Hellfighters)” is one of the strongest moments of the record. These songs, just like those on the last record, are on the longer side, with most of the ‘main’ tracks passing the 7-minute mark, so there’s room to fluctuate between styles within songs, which 1914 again do well.

However, there are a few relative surprises to be found here. The first can be found early on with “FN .380 ACP#19074”; the soundscape of this song, a fiercely melancholic piece, is elevated by the use of synths resembling brass and string orchestral arrangements. It’s a really powerful combination, with the direct emotional force of the metal accentuated by the synth accompaniments; “FN .380 ACP#19074” does a great job of making listeners immediately excited for the rest of the record, even though these synths are only used sparingly afterwards. For me, “FN .380 ACP#19074” is a cut above the rest of the tracklist here; there’s something about the burning passion felt within the song that allows it to resonate in a way that the subsequent songs can’t quite match.

One other novelty that you might already have noticed is the inclusion of a couple of guest vocalists near the middle of the album. “Coward” is the less conventional of these two, a stripped-down acoustic folk ditty over which Ukrainian folk singer Sasha Boole decries the hellish conditions of the Western front. The more famous guest is Nick Holmes of Paradise Lost fame, who makes a clean vocal appearance midway through “…And A Cross Now Marks His Place”; this gothic-tinged mid-song dirge doesn’t quite click for me, but it’s good to see 1914 attempting different ways in which to expand their sonic palette.

Where Fear And Weapons Meet doesn’t quite match The Blind Leading The Blind for me; “FN .380 ACP#19074” and “Don’t Tread On Me (Harlem Hellfighters)” are exciting early highlights, but the album as a whole doesn’t quite have the same insidious pull across the whole record as its predecessor. Still, there’s not many bands out there that sound much like 1914, so even if they’re not setting the world on fire here, it’s a strong enough record to sustain the hype the band managed to generate last time around.

Written on 22.10.2021 by
musclassia
Hey chief let's talk why not
More reviews by musclassia ››