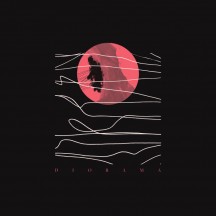 
Here’s an album for everyone disappointed by Deafheaven’s latest.

Danish band Møl caused a bit of a stir when they arrived in 2018 with their debut record Jord. That wasn’t due to originality, as it followed the blackgaze template established by Deafheaven in particular quite nakedly, but because it possessed a hookiness and memorability that elevated it above most other bands emerging within a similar timeframe. On Diorama, not much has really changed on that front, either concerning novelty or quality.

Post-hardcore-inspired drumming rhythms? Delicate clean lead guitar melodies? Euphoric high-pitched tremolo in major keys? Detours into slightly nastier blackened riffs? High-pitched shrieks sitting right in George Clarke territory? Check, check, check all round on “Fraktur”; this song to me is pretty much a pre-Infinite Granite Deafheaven song but with half the length. Now, there are some new things on Diorama compared with Jord; probably the most easily noticeable is the inclusion of guest vocals on a couple of songs courtesy of Sylvaine, which can be heard on “Photophobic” and the title track. In the former, they appear during a soft section between the blasts at the beginning and the ear-catching guitar melody near the end, adding a nice ethereal air to this lull in the song.

Probably the biggest surprise for me, however, was the song “Serf”; between the central hook of the track and the galloping chug underlying the verses, “Serf” goes closer to melodeath and metalcore territory than anything else of the record, a trend that works very much in its favour, as the song is clearly the highlight of Diorama in my opinion. Hopefully we can be treated to more songs in this vein on future Møl albums, as it’s pretty fantastic in my book, but also sounds slightly out of place when set against the ‘pop punk turns black metal’ intro of “Vestige” that immediately follows once it’s over.

Outside of “Serf”, if you’ve heard Deafheaven before, you know what to expect here. Still, with Deafheaven dropping the ‘black’ from their -gaze, there’s a void to be filled, and between the memorable lead guitar melodies, the smooth transitions within songs from relative aggression and stretches of ecstasy to subdued melancholia, and the unusually compact approach applied when packaging these ideas into songs, Møl have the abilities to fill that void. They also manage to throw in a few more standout moments after “Serf”, whether it’s the gloomy hints heard in “Itinerai” courtesy of the post-punky chorus or the relatively high intensity of “Tvesind”. Completely at the other end of the intensity spectrum to “Tvesind” is “Diorama”, where Sylvaine and Kim Sternkopf share a clean vocal duet.

Diorama is an album that is written by the book for the most part, but any copying has been done with the intention of producing the best version of this style that Møl can muster, and their best is a cut above most of their peers. It’s not quite an Ordinary Corrupt Human Love, but it nicely scratches the same itch, and with the odd distinctive moment that adds a little something extra thrown into the equation, it should more than satisfy any genre enthusiasts that otherwise felt short-changed in 2021.

Written on 10.11.2021 by
musclassia
Hey chief let's talk why not
More reviews by musclassia ››