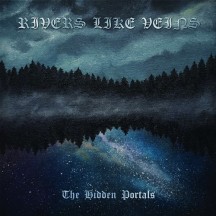 
01. Into The Cosmic Waters
02. The Capricornus Void
03. The Labyrinths Of Brahman
04. The Wanderer On The Edge Of Dreams
05. Composition II (Smorzando)
06. Vedic Crystal Keys
07. Pseudotsuga (Angelo Badalamenti)
08. Multiverse Visions
09. A Puzzle Of Flesh


Some albums just beg for your attention. Not sure what is in the water in Poland but this country has consistently outdone itself with impressive metal acts lately. Rivers Like Veins is another one of those bands with a relatively low profile but a ton of promise and talent. All of that is already 100% materialized on Hidden Portals, which is why it has been on my permanent rotation this year and virtually impossible to ignore as one of my favorite releases of 2021 even though the year has been full of goodies.

After the ebb and flow of the intro of those cosmic waters, the real sonic flow unfolds with "The Capricornus Void". The production is Mgła-esque. You know what I mean; that crisp guitar sound, that harsh voice and that overall dirty atmosphere somehow oozing from clean cheery keyboards and well-placed folkish elements. The recipe is then repeated multiple times to great effect. The songs are all more hypnotic than catchy but still memorable somehow. The use of clean female words in Polish only enhance the experience. "The Labyrinths of Brahman" sounds a little more black’n’roll than the opener without straying too much from the base sound. "The Wanderer on the Edge of Dreams" only brings back additional praise with sparse hints of early Agalloch and a renewed intensity they also brings to mind a band like Shining.

Talking about great influences, "Vedic Crystal Keys" takes its time to impress but sure does the job in a 50/50 split Thy Catafalque / Limbonic Art way. Then the rest of Hidden Portals takes a post-rock approach to atmospheric black metal with the track "Multiverse Visions", or maybe it is a nod to the ever-evolving sonic landscape of Sigh? Either way, it does not let you down in terms of brutal creativity and refreshing newness. The cherry on top as often in well-crafted album is the closing track. "A Puzzle of Flesh" does encapsulate the many facets of all of the aforementioned influences and brings it all home in one classic instrumental masterclass.

There is primordial rage, desperation, and an all encompassing array of emotions on Hidden Portals. I mean that with the highest degree of praise for all bands involved, but Rivers Like Veins sound like if Kauan wrote a Mgła album; or the other way around. This is the kind of record that makes me love writing reviews. Complexity unfolding into a torrent of emotions, which is perhaps what is meant by rivers like veins. Hidden Portals is a definite gem for fans of atmospheric black metal with a propensity to diverge into many melodic tributaries and dark effluents.

Written on 16.11.2021 by
Dream Taster
Bringing you reviews of quality music and interesting questions such as: