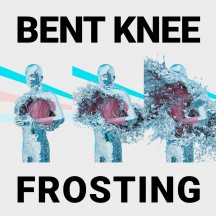 
Once in a while there comes an album that's so divisive that I can absolutely guarantee that you haven't heard anything like it.

Granted, you may have heard of Bent Knee, since I had actually already reviewed one of their albums, and they were already a pretty established name, and I already knew to expect something out of the ordinary from them. But while we were busy with OSDM, raw one-man black metal bands and bedroom djent, in a completely different corner of the internet a microgenre of sorts was developing around the PC Music label. I'm sure the "hyperpop" name is pretty baffling to most of you, as well as stuff like "bubblegum bass", "digicore", or "nightcore". Hell, I imagine someone who is a fan of hyperpop would be pretty baffled to hear that something like sludge metal or goregrind or funeral doom is a thing. So even if there is some really abrasive music in that side of the internet, I never really expected these two music worlds to meet.

And I don't wanna dive to much into the hyperpop aspect, since there's much more to Frosting than the fact that it's borrowing some influence from an unexpected place, but at the same time, that completely unexpected influence is what had me so perplexed in the first place. Bent Knee were never too far from pop music, since they were never really a metal band (don't ask why they're here then), being more of an art/prog rock/pop outfit. And Frosting is still first and foremost an art pop record, with Bent Knee's knack for dynamics and engaging melodies still clearly present, as well as them being among the only bands on here who can take avant-garde sounds into the complete opposite of a dark place. And this time, those avant-garde sounds go into some wild processing.

I'm sure there are some people who are really mad at pop music's autotune, just like that one prick who kept messaging bands to ask if they had triggered drums and then calling them sellouts. There's a lot of interesting experimentation that can happen once music is taken out of the analogue into the digital. And I'm not gonna scold someone for not appreciating that approach here, since I'm someone who is still trying to figure it out, and who strangely prides themselves in never having listened to a 100 Gecs song. But if pop music has digital processing, hyperpop aims to ridiculously take that out of proportion and take it to its logical limit. Hence why a lot of Frosting sounds absurdly electronic. Sure, their approach is pretty different than what you'd find on a Charlie XCX song, because they're going at it from a different direction. But it's all trying to take things to another level.

So the result is baffling and exciting. Both for pretty much the same reason. This is a new approach for art pop and a new approach for hyperpop. At this point I wouldn't even care if it sucked. After listening to so many metal albums that could have been released at any point in the past 30 years and it wouldn't make a difference, it's great to finally review an album that genuinely takes me by surprise. And this even competes with the stuff I review for our non-metal series, for which it would have probably been one of my monthly picks. Thankfully, it doesn't suck, even if I'm skeptical of the execution of some tracks. And by "skeptical" and "divisive" I mean that I would have loathed this album a couple of years ago. Thank God I'm not me from a couple of years ago.

Written on 18.11.2021 by
RaduP
Doesn't matter that much to me if you agree with me, as long as you checked the album out.
More reviews by RaduP ››