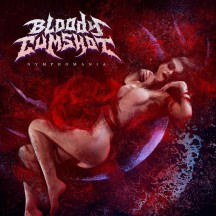 Nymphomania is a brief album, with 10 songs that combined run for less time than Reign In Blood. This is because the large majority of these pint-sized songs, not unlike Reign In Blood, are very fast and frenetic. “Shoot Your Ugliness” sets the tone early on with an onslaught of pounding drums, twisted riffs that lurk somewhere between Dark Tranquillity and Children Of Bodom, Alexi Laiho-esque shrieks and a nice splash of cheesy synths. There’s a couple of other songs on the record that are Bodom-y, such as “Vagina Dentata”, so it’s not a complete Gothenburg tribute. Additionally, although for the most part those grindcore vibes are off the money, there’s something about the ballistic nature of some of the sections within the songs that do lean close to grindcore, and “Menstrual Chocolatier” actually sounds reminiscent of Cattle Decapitation, partly thanks to the growled approach opted for here.

Still, the Gothenburg influence is unavoidable really. The riffs on “Hate Fuck” owe a lot to Dark Tranquillity (this song also has a very memorable lead hook in the chorus), whilst “Slave Humiliation” is In Flames through and through; if you don’t hear an obvious resemblance between the opening lead of this song and the one in “Embody The Invisible”, then I don’t know what to tell you. But as derivative as sections on this album are, it’s hard to particularly care. Why? Because, as I mentioned in the opening paragraph, Nymphomania is an incredibly fun album. An assault of memorable hooks thrown at you relentlessly, it’s one of those ‘up to 11’ records that comes along in a subgenre every once in a while and delights enthusiasts. Also, the sheer aggression of this record should give it some appeal to those ‘I like melodic death metal, not melodeath’ people as well.

Don’t let the puerile packaging fool you; this is a very well-written, well-produced and well-performed record, it’s just one that’s not afraid to have some fun. If you haven’t had a melodeath overdose after all the big names that put out records this autumn, or if you’re bored of the sadboi/proggy melodeath and want something no-nonsense that goes right for your throat, set aside a half-hour for Nymphomania.

Written on 19.12.2021 by
musclassia
Hey chief let's talk why not
More reviews by musclassia ››