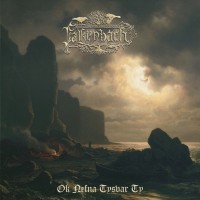 
Ok Nefna Tysvar Ty is argubly Falkenbach's best album, and one that should not go unnoticed by any Viking metal enthusiasts.

Little is known of this one-man band from Germany in the metal world, that is unless you delve into the Viking metal genre itself, in which case Falkenbach will be often mentioned as pioneers, even considered masters of the genre alongside the likes of Bathory's Viking era, Månegarm, and of course Moonsorrow.

Although helmed by Vratyas Vakyas, session musicians were brought in for Falkenbach's third release, Ok Nefna Tysvar Ty. On this album, Falkenbach use a great deal of traditional folk elements, even more so than on the previous release, as they wanted to create a more epic soundscape, as opposed to the blackened atmosphere of the previous releases. The style does have similarites to Moonsorrow, but unlike Moonsorrow, the songs here on Ok Nefna Tysvar Ty are more easily accessible, as most don't have a running time of 10 minutes or more.

Much like Viking-era Bathory, Falkenbach tend to use atmospherics such as ocean waves, like on the opening to the song "Vanadis", as well as the sound of horns, to give a the listener a real sense of Viking exploration and adventure. The album starts off in epic fashion with the atmospheric opener "Vanadis", which is the longest track on the album at 9:25 minutes, but the sheer quality continues throughout the entire album. In particular, the final two tracks, "Homeward Shore", and "Farewell", are argubuly the two best songs in Falkenbach's whole discogroghy; "...As Long As Winds Will Blow..." and "Donar's Oak" are also top quality songs, with some striking folk melodies.

The album Ok Nefna Tysvar Ty shows some of the best musicianship this genre has to offer, and I think it's fair to say that Falkenbach not only pulled off a classic by their standards, but for Viking metal as a whole.