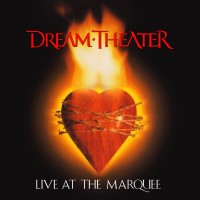 
Progressive metal masters Dream Theater returned in 1993 with their all-time first live album, or more exactly, live EP, the record clocking just under 47 minutes. And what other place in Europe than The Marquee Club in London to record this little piece of art? Recorded in April 1993, this EP is a testimony of their first European tour and also a unique image of what the band was with its most famous lineup: Mike Portnoy [drums], John Petrucci [guitars], John Myung [bass], Kevin Moore [keyboards] and James LaBrie [vocals].

The second very peculiar aspect about this album is it's to my knowledge the only live performance recorded in which James LaBrie had to interpret songs from Dream Theater's debut album, "When Dream And Day Unite" [since all of you remember that the singer was Charlie Dominici on this record]. And the result is simply the best live performance of James LaBrie ever recorded! Far from his hesitations on other live albums, on "Live At The Marquee" you can hear James at his best on stage.

About the songs, 'Metropolis' and 'Pull Me Under' are the best tracks but meanwhile 'A Fortune In Lies' and 'Another Hand , The Killing Hand' are the most interesting ones. By the way, that intro called 'Another Hand' is unique; at least, I have no memories of hearing that on another CD. This EP also features a great improvised jam called 'Bombay Vindaloo'; Dream Theater's fans would be totally in heaven with that track! My least favorite song on this album is 'Surrounded', which could have appeared as a good composition in 1992 but sounds unfortunately too cheesy nowadays. Now the big flaw of that album is the fact that it is an EP and I surely would have wanted to listen to more songs such as 'Afterlife', 'The Ytse Jam', 'Take The Time' or 'Learning To Live'. But I guess, at that time, that was more a matter of money than a real choice from the band. We don't have to forget that this album was their first tour in Europe and in the early 90s. Nowadays, Dream Theater can just record a two or three CDs live album and that's what I like. Nevertheless, I should be glad that they have at least put something onto a record for their first tour.

In a nutshell, if you like the progressive aspect of their music, no problem, this "Live At The Marquee" is an essential in your collection. If you're only attracted by Dream Theater's last couple of releases ["Six Degrees Of Inner Turbulence" and "Train Of Thought"], listen carefully to that one before buying as it is a slightly different kind of music.

Written on 09.01.2004 by
Dream Taster
Bringing you reviews of quality music and interesting questions such as: