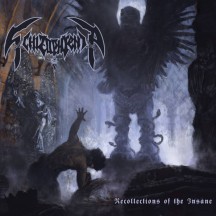 
01. Divine Immolation
02. Cranial Disintigration
03. Sea Of Sorrow
04. Monolith
05. Onwards To Fire
06. Souls Of Retribution
07. Inside The Walls Of Madness
08. Fall Of The Damned
09. Stratified Realities

Belgium death thrashers Schizophrenia unleash their debut album Recollections Of The Insane on an unsuspecting world, making their mark in a violent and loud way that is sure to pique the interest of many a metalhead. The band formerly known as Hämmerhead unleash a record filled with powder keg, rapid-fire riffs and blast beats; Recollections Of The Insane appeals to those who enjoy their metal riding on the red while clinging on through an unrelenting barrage of solid metal.

Aside from a few atmospheric passages here and there, “Divine Immolation” sets the pace for the record once it bursts to life after its intro section, setting the scene in all its chaotic fashion. Where the album excels is when Promopoulos and VK push themselves that bit further and weave excellent passages of guitar work together, with the rest of the band ably holding down the rest of the track; songs like “Souls Of Retribution” and “Cranial Disintegration” highlight the album at their best.

While Schizophrenia don’t offer much in terms of originality, they produce a fun and enjoyable take on the death/thrash formula that will likely scratch the itch of those seeking something new in the genre, slotting in nicely alongside the likes of Massacra and Thanatos with tracks like “Monolith”. The band are more than capable at what they set their minds to, with Vissol providing a solid backbeat to power the rest of the band forward. While Mandozzi has a solid death metal voice and one well suited to the music, its impact does diminish as the more of the album you listen to, with each successive song highlighting the lack of variation in his delivery and style of singing.

Recollections Of The Insane doesn’t suffer from much in the way of production problems, with the tone of each component part being solid and presenting the music in its best form. Vissol’s drum are punchy and powerful, yet do not overbear upon anyone else, while the guitars and vocals are balanced perfectly, sitting side by side and getting equal focus in the mix. The only element that could do with improvement is Mandozzi’s bass, which is relegated to the bottom of the mix (“Sea Of Sorrow” being one of the few moments it is given space in the mix) and left to rumble away underneath the rest of the band, devoid of much in the way of space to breathe.

Recollections Of The Insane does fall afoul from two problems that ultimately reinforce the other; with the album not being the most original take on the sub-genre, it does mean the album’s initial charm wears out faster than usual. While it doesn’t derail the album, it does mean the rate of diminishing returns is faster than it could have otherwise been; once you have spun the album a few times, the album feels rather bland on the whole, with a few tracks being the exception to the rule.

Schizophrenia make an admirable first attempt, one that shows a hell of a lot of promise, and one that is delivered upon to a good degree. Recollections Of The Insane provides strong footing for the band to build upon, leaving its mark upon listeners who will likely make a note of further activity from the band once they have honed their talents in future.

Written on 28.02.2022 by
omne metallum
Just because I don't care doesn't mean I'm not listening.
More reviews by omne metallum ››