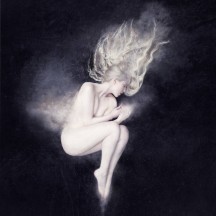 
How much more blissful can one be?

Sylvaine should not be a new name at this point, especially to those into blackgaze music. Kathrine Shepard, known by her stage name Sylvaine is a Norwegian artist that has been doing some sort of shoegaze since 2014. Her debut, Silent Chamber, Noisy Heart was my introduction to her, and that's still her most distinctive album because her sound wasn't shaped yet and there was very very little metal in her metalgaze at that point. Ever since, Alcest's Neige has been involved in her music. As a drummer, both in studio and live, as a producer, and as a songwriter. And that's so blatantly obvious in Sylvaine's sound since.

When I reviewed her previous record, 2018's Atoms Aligned, Coming Undone, I did mention that a lot of it felt weird because of how close it sounds to Alcest's sound despite feeling a bit behind in quality. I can't say that this completely changed with Nova, because most of it still sounds like Alcest's gender-swapped twin, with a resemblance that's quite uncanny. But some things did change. Sylvaine guested vocals on another Alcest album, bridging the gap even more, and this is the first Sylvaine album in a while in which Neige wasn't directly involved, thus making this even more of a Sylvaine album.

The other thing is that the quality difference between the two has been diminished even further on this record. The harsh vocals, which felt a bit unpolished and underutilized on Atoms are now better integrated and better performed, while still leaving center stage for the ethereal cleans. The blissful feeling has an even less artificial aftertaste, the flow of the album makes everything more impactful, and just generally it finds Sylvaine improving her craft on all points, despite not moving the sound in any new direction. Dorian Mansiaux's drumming is a pretty good match for the record, and the guest strings provide some nice dramatic impact into the improved layering.

It kinda arrived at a point where I'm not sure if I really want Sylvaine to forcefully branch out into something less-Alcest-y. Seems like she does this extremely well.

Written on 09.03.2022 by
RaduP
Doesn't matter that much to me if you agree with me, as long as you checked the album out.
More reviews by RaduP ››