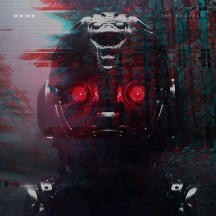 
The music, band name and artwork of Mammoth Weed Wizard Bastard’s The Harvest are not natural bedfellows. Once you get past the whiplash, however, you’ve got a pretty great album to get stuck into.

I’ve already reviewed one album from MWWB, and when doing so I mentioned how their name gave me expectations of a rambunctious, angry stoner/sludge sound akin to a High On Fire, while what I actually heard was an electronics-heavy psychedelic stoner doom/space rock mesh that sounded like an ethereal Ufomammut more than anything else I could compare it to. With its celestial album artwork, this sound made sense on Yn Ol I Annwn, but their follow-up record, The Harvest, has an Ultron-esque figure and dystopian sci-fi filter on the cover art, so some (like myself) might anticipate a more industrial or cyber-metal approach this time around; however, once again I was wide of the mark.

In some sense, one could argue it’s a bit of a shift in that direction, in that this album is definitely more synth/keyboard-heavy; they were certainly present on Yn Ol I Annwn, but between the ambient opening track, soundtrack-style synth blasts on “Interstellar Wrecking”, synthwave-inspired layers on “Betrayal” and meandering keyboard lead on “Let’s Send These Bastards Whence They Came”, MWWB have decided to isolate them as an individual component on several tracks this time out. However, this quartet are but interludes interspersed between four longer, heavier tracks, and on these songs that represent the ‘core’ sound of MWWB, the electronics do shift to the background as more of the expected psychedelic/space rock flavouring, such as the warbling, meandering sounds during the verses of the title track.

The core sound of MWWB remains as something most easily defined as ‘stoner doom’; however, considering the how many bands with that tag fit a very generic template, this Welsh band have a very distinctive voice. For a start, they arguably veer closer to doom with a stoner metal edge instrumentally, coming through mostly in the fuzzy tinge given to the sinister and stomping riffs, compared with some bands under the umbrella that sound more like slow stoner metal. I compared the band to Ufommamut a few times in my last review, and I can still hear the resemblance, but The Harvest doesn’t have quite that same specific esoteric edge this time around; however, there’s still psychedelic detours across the record, such as the trudging bridge during “Logic Bomb” that is drenched in mystical, celestial electronic layers or the sci-fi sound effects during the churning, twisted latter stages of “Strontium”.

The aspect of MWWB that stood out most on Yn Ol I Annwn, however, is the one that still stands out the most on The Harvest, and that’s Jessica Ball’s vocals. The gentle, light tone of her singing places it at such a contrast to the heaviness of the instrumentals, particularly compared with the booming roars or Ozzy-style eeriness lots of similar bands opt for, but they work so well, giving an ethereal elegance to the music that transforms it compared with initial expectations. I already found this approach really intriguing on the last album, but there were times when I didn’t think the execution completely translated, with a sense of meandering and lack of direction without clear hooks somewhat detracting from my enjoyment. This time, I felt they worked really well throughout, with the whole ensembles of sounds and ideas coalescing nicely. They work best on “The Harvest”, with the more melodic backdrop to the chorus and harmonized layering of the vocals coming together to great effect, but I really enjoy this record throughout.

There is still a bit of a sense for me with this album that the concept is more compelling than the final product, but it’s much less the case than it was with Yn Ol I Annwn. In a world where stoner doom is rife with unoriginality, Mammoth Weed Wizard Bastard throw psychedelic and space rock into the equation and come out with a sound that is entirely their own, and that is commendable. Although, after having initially thought that this might have an industrial or synthwave edge to it, I now wonder what madness could be unleashed by MWWB venturing into even stranger waters.

Written on 27.03.2022 by
musclassia
Hey chief let's talk why not
More reviews by musclassia ››