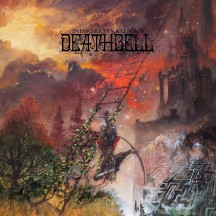 
A clear example of the subgenre, but very much by the numbers...

You know, if there’s one thing that I’ve learned over all the years I have been active on these forums, is that (sub-)genre can be a big point of discussion. One person says a new release is clearly death metal, whereas another person is fully convinced it’s the latest and greatest glam metal release.

Let me be straight here, A Nocturnal Crossing is not one of those albums that leaves any room for discussion about what kind of subgenre it is. This is without a doubt a folk metal album. Now, I’m obviously just being silly. This is doom metal, no possible discussion about it.

And honestly, there isn’t a lot to say about this Deathbell record. It feels like your typical very slow doom metal piece. Perfectly serviceable, but also quite boring and uneventful if I’m honest. Production wise, I can’t complain. Vocals are mixed in well, drums are prominent enough to give that classic extra impact in slower parts, and guitars have the gritty distortion you would expect from this type of album.

That’s probably the biggest issue of A Nocturnal Crossing. It’s extremely predictable. The flow and pace is solid, performances from the band are good, and the production is really well done here. But does all of that really matter, when you don’t feel in any way engaged? I don’t know, I guess it does. However, the reality is that this record won’t get any more re-listens, not because it has more flaws or is completely flawed, but because it’s just not memorable enough, unfortunately. The thing is, I feel like an album in most other subgenres suffers less from being a bit generic. In the case of doom metal though, there is that emphasis on atmosphere. Often it’s dark, gloomy, a bit haunting, sad, unsettling and mysterious. A Nocturnal Crossing has these elements, but they feel (too) familiar. Which leads to the previously mentioned aspects of being a lot less impactful.

And that’s a shame, because I feel like these guys have potential. Like I have already said, the performances are very good, so there’s potential here. They seem to really understand what doom metal is all about. Now I’m just hoping that in the future they will mix a little bit of extra creativity and personality in their sound. Giving it its own unique voice.

As it stands though, do I recommend listening to this one? Maybe for diehard fans of doom metal. For others, I don’t feel like this is going to leave any big impression on you whatsoever. All in all, it’s fine for what it is, but unfortunately there’s this lingering feel of missed potential in my head. Hopefully, with their next album, they will find that extra spark of creativity I crave for. A Nocturnal Crossing isn’t bad by any means, but it’s kind of like a 3-month relationship anniversary. You’ve probably forgotten about it, but is it important to remember anyway?