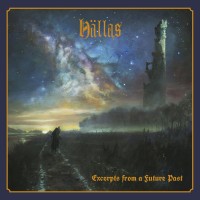 
This is a truly majestic album, one that reminiscences on the classic bands who thrived during the great 70's progressive rock era, taking influences from bands such as Wishbone Ash, Yes, Genesis, Uriah Heep, Jethro Tull, and early Rush, and then brings its very own modern twist on things.

Some would quite rightly argue as to whether any of these bands mentioned had enough influence on metal at all; well, hard rock they certainly did have influence on, in particular Rush and Uriah Heep, and it's within these hard rock influences that Hällas come into their own. I know there is a fine line between hard rock and metal, but Hällas do have a degree of metal in their music style, particularly in their guitarwork.

The heavy riffs, and strong keyboard melodies, are sometimes bordering on the same level of heaviness as early Deep Purple, who I would say were certainly heavy metal, and pioneers at that. But despite this controversial topic over whether they are metal or non-metal, there is only one important fact, Hällas are a truly great band that deserve recognition, as they bring forth great modern progressive rock whilst reviving the sound of old prog greats at the same time.

This album is the second installment from a trilogy, which is set around a great alternative medieval fantasy theme, containing mesmerising melodies and sounds. The vocals are very distinctive; they are soft and gentle, but really draw you in, and blend in perfect harmony with the instruments being played. The keyboard melodies, bass lines, and riffs are all very well structured, and contain some wonderful melodies. Once everything comes together, something truly magical happens. There is a real sense of progressive nostalgia happening, which is certainly uncommon to hear from bands nowadays; without former knowledge, this album could easily be mistaken for a 70's album in all my honesty.

This album does have its drawbacks, just as you would expect from most of any album, but you do need to dig real deep to find those drawbacks. The consistency, for instance, isn't perfect; there are several tracks that aren't quite as good as others. It's not like there are any bad or sub-par tracks on the album, because this for me isn't the case, it's just that this is short of those real standout tracks that are truly memorable. After listening for the first time, I thoroughly enjoyed the experience, but I wasn't completely wowed; it took several more listens in order for certain tracks to fully sink in. The two songs that I immediately took to were "The Golden City Of Semyra", which has one of the best intros I've heard in recent years, and "Shadow Of The Templar", which also is a great song. All in all though, I wouldn't say there are any tracks that I would say are necessarily skippabble, in my opinion.

This is a remarkable album, much like the rest of their discography, which is well worth digging into. And if you're a fan of the 70's progressive rock era, then this will be right up your alley.