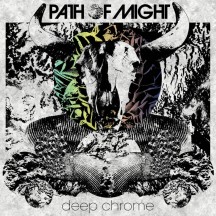 Missouri’s Path Of Might, a 3-piece at the time of releasing their previous record Hallowed Gate Style, have grown in number across the intervening half-decade and are now 5 strong. This growth seems necessary, because the music on Deep Chrome sounds far too textured and engrossing to be performed live by only 3 people. If you’re looking for a quick stylistic summary of Path Of Might, perhaps ‘sludgy prog with some stoner, as well as hints of ambient and post-metal’ will cover it. And yes, perhaps that description could apply to Dvne’s latest album, but if it’s possible to have a wide range of possibilities when using as specific a description as that to encapsulate music, Deep Chrome is about as far away from Etemen Ænka as it’s possible to get within that microniche.

How is that? Well, above anything, there’s more of a grounded feel to Deep Chrome; there was an air of the fantastical to Etemen Ænka, something that I don’t get from this record. That’s not a complaint, though; the sludge in opener “Viper Matrix” is somewhat reminiscent of a band like Kylesa or even perhaps Helms Alee, only with both an added heaviness and a proggy shimmer applied to it, allowing it to be equally gnarly and psychedelic. Throw in some tasty southern guitar leads and it’s a solid opening to the record. The electronic ambience of “Wormhole” perhaps hints at a more supernatural quality to Deep Chrome, but those southern sensibilities and classic prog vibes prevent it from launching too far into orbit.

For the most part, Deep Chrome follows a song-interlude-song-interlude format, albeit with the exception that “Supergolden” is not only notably more developed than the other even-numbered tracks, but is also only a half-minute shorter than the song before it on the tracklist, “Cactus Rose”. The song/interlude format can sometimes feel a bit hokey, but the interludes feel both different enough and sufficiently well integrated into the backbone of the album that they function nicely as ebbs to the general flow of the album. What makes Deep Chrome most rewarding as an album experience, however, is just how damn good all the ‘main’ tracks are.

In place of the sludginess of “Viper Matrix”, “Mercenary Territory” shows off the stoner influences of Path Of Might, from the fuzzy bass tone to the Ozzy-inspired vocals and desert rock riffs, while still keeping everything embraced by a proggy embrace. While “Cactus Rose” remains to some degree a prog stoner track, with ear-catching slick guitar work, it is further embedded inside a post-rock/post-metal framework, as Path Of Might take ideas and build other ideas on top of them. And just when you feel like they’re going to keep building up and up, they dig out the floor, and that lively stoner fuzz dissipates for the atmospheric “See You At The End Of The World”, which almost manages to sound empty despite having huge drums and ample distortion with dramatic keyboards layered on top. Deep Chrome is an ever-evolving journey, one that takes you almost into a void with “Antimatter”, only to smash you with everything at once by finishing with the massive “Armitage”.

Deep Chrome is a fascinating record, one that effortless combines the murky, the grandiose, the bright and the melancholic, traversing the unmapped terrain between on an unpredictable and subtly evocative journey. With occasional faint nods to bands such as Elder, SubRosa, Minsk and more, Path Of Might forge a path that is distinctly their own, and I am right here to see where it leads next.

Written on 11.05.2022 by
musclassia
Hey chief let's talk why not
More reviews by musclassia ››