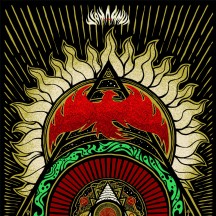 
Ladies and gentlemen, we are floating in space.

Space rock being an influence to stoner metal is not that much of a surprise. Though it also infiltrated some other genres (see Oranssi Pazuzu), the fact that space rock and psych rock and krautrock are almost indistinguishable made stoner metal a much more fertile ground for interaction between the two. Monster Magnet, My Sleeping Karma, Spaceslug have distinguishable space rock influence, and on the other side of the isle, there's space rock bands that are heavy enough to merge into metal, like Yuri Gagarin or Slift. So Hawkwind and Spiritualized might be bigger influencers than we give them credit for. But out of all of these, merges, there's one band that I feel encompasses this best: Ufomammut.

I mean, they have "UFO" in their name. That's about as much as you could possibly wish. Though Ufomammut also sit a bit weirdly in this, not being as clearly a stoner metal band, with a bass so punchy and riffing heavy enough to get into sludge territories, even as atmospheric as post-metal, thus the sound they have is quite expansive. Moments patient enough to fall into drone metal, and most of these genres also fall under the doom umbrella. You can throw a lot of genre tags as Ufomammut, and their sound gladly consumes all of them. You'd think that more than twenty years of Ufomammut releases would have us having an easier time figuring out which one of these should be the genre tag. How foolish to assume that.

Fenice continues the standard Ufomammut sound, but it finds them in a quite new position. Their first after the departure of their longtime original drummer, while also being the longest gap between albums for them, there's quite some push for reinvention on Fenice. And as the album title means "Phoenix" in the band's Italian language, it fits thematically, with the album being more introspective, mellow, and synth-heavy than usual. Thus you'll find both the bass-heavy psychedelic grooves in their trademark sludge heaviness, the space rock soundscapes courtesy of the mix of guitars and keys, an even heavier use of choirs and effects, creating an album that feels simultaneously towering and pensive, expansive both outwards and inwards.

Though more of a rejuvenation than a complete reinvention, Fenice injects some new vitality in Ufomammut's dense psychedelia, still offering the plateau of genres wise, maybe even more dynamic that before.