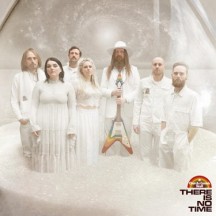 Take a moment to hug your loved ones and give your boss the ol’ Stone Cold stunner, for Church Of The Cosmic Skull are back with an album titled There Is No Time. Given their preceding record, titled Everybody’s Going To Die, was released mere months before that Covid thing, it might be tempting fate or a psychedelic prog-tastic prophecy, listening to There Is No Time. Either way, it’s a decent reason to take a sick day from work and lock yourself up in your doomsday bunker while giving this record a spin and counting your bottle caps.

There Is No Time seemingly maintains this precarious tightrope walk level of balance, with tracks like “Now’s The Time” feeling like a mini-epic in a satisfying four-and-a-half-minute portion, forgoing the gluttony while ensuring you have your fill. Perhaps key to this is the vocal interplay, highlighted on “Last Words Of A Dying God”, which adds dynamism and grandiosity to proceedings, with the solid utilisation of female vocals (courtesy of Nicholson, Cawley and Joyce) lifting the tracks up a notch. Wetherburn’s organ once again is what catches your ear, with “Pleading With The Cosmic Mother” hooking you in as you are lulled in by the Moog-esque organ work. The production on this album balances all the different elements at hand while adding to the band’s sonic aesthetic, leaving you with the ideal conditions to enjoy this album and giving the songs the best platform they could ask for in order to present themselves to the listeners.

However, like a sloth doing horticulture, I thought that this album might be slow growing when the initial spins didn’t make me prog out in awe from the first listen, but even with repeated listens, There Is No Time has a stunted growth in comparison to their previous records, not reaching the same heights by a wide margin. The album just feels like it is missing that magic spark; they have all the pieces in front of them as before, but they just don’t connect together for an exciting end product, leaving you with an ok, though unsatisfying, album that is easily their weakest output to date.

That said, “One More Step” and “Valleys and Hills Part I - Peel Away The Layers” just feel incomplete, as if they’re half-thought out ideas that have been thrown onto the album (which take up a combined ten minutes of the near forty-minute runtime) for whatever reason, leaving you wondering why the band thought they were complete. The latter track, in particular, has some good, distorted guitar work and will make you smirk as they conjure up that scene from Shrek, but beyond that it just doesn’t go anywhere and yet it keeps going.

There Is No Time is ultimately a damp squib, a record that I was really looking forward to getting my hands on, but which fails to spark in any meaningful way. While there are some tracks that are passable and not bad, there are none that would make me want to put this album on over the band’s prior work, ironically meaning that when you want to listen to some Church Of The Cosmic Skull, there is no time for this album in amongst the rest of their work.

Written on 21.05.2022 by
omne metallum
Just because I don't care doesn't mean I'm not listening.
More reviews by omne metallum ››