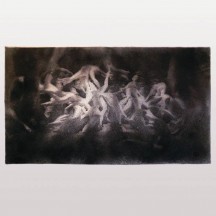 
Delvoid remind me of a lot of bands that I like with Swarmlife; unfortunately, most of them are bands that I have mixed relations with, and the same applies to Swarmlife.

The Nordic countries have offered up their fair share of heavy prog with a unique flair in the past decade or so, with the likes of Leprous, Agent Fresco, Airbag and Port Noir serving as just a few examples. Norway’s Delvoid is another name to add to the pile, with the quartet incorporating post-rock, alt rock and post-hardcore influences into a metal-leaning progressive rock framework. It’s a concoction that takes cues from and bears similarities to a healthy range of other acts swimming in these waters.

Clocking in at a round hour in length, Swarmlife is made up of 6 similarly long tracks. The first of these, “Techtree”, exhibits the aforementioned post-rock elements during a slowly-building and cathartic mid-section. It also forces upon listeners the first of those comparisons, as Alex Delver’s vocals swiftly bring Karnivool’s Ian Kenny to mind when he raises the volume. Curiously enough, it’s not so much Karnivool as Jim Grey from their Australian prog brethren Caligula’s Horse whose vibes I feel more strongly on the likes of “Urras” and “Collapsist”. As far as other bands that come to mind across Swarmlife, there’s more than a hint of Rishloo’s quieter, more meandering material on “Urras” and “Out Of Labour”, as well as some riffs reminiscent of Riverside, bits of Leprous, and vocal sections that bring Port Noir and At The Drive-In to mind.

A lot of Swarmlife is on the quieter side; there’s a prolonged ethereal instrumental bridge in “Our Of Labour”, and the jazzy undertones of this section become enthralling in how they subtly evolve towards an eventual heavy riff section. “Collapsist” also features an elongated quiet section towards its end that undergoes tiny yet essential progression that results in a mini-climactic ending. However, this song also shows off the more metallic side of Delvoid, which harken to some of Caligula’s Horse’s material. Delvoid are clearly capable of writing both louder and softer music, and yet my gripes with this record involve both to certain degrees. I’ve less issues with the softer material; they can run overly long or lack direction, with moments in both “Out Of Labour” and “Third Body” that make me feel that way, but for the most part they contain enough content and progression to not wear out their welcome.

Actually, it’s louder tracks and sections that I find irk me more frequently. “Urras” is comfortably my least favourite track on the album, and part of that is due to moments of aggression or ‘attitude’ that kill my enthusiasm towards it; it’s potentially a matter of personal preference, but a line like ‘when there’s no system to fuck’ feels unnecessarily edgy to me. Some of these issues do come down to the vocals, and the mixed relations that I alluded to in the title apply equally to Alex Delver’s work in Delvoid and that of Jim Grey and Love Andersson in Caligula’s Horse and Port Noir, respectively; all are clearly talented and can use their talents to great effect, but in moments of histrionics or overdelivering, such as early in “Out Of Labour”, I find each individual’s skills to be a double-edged sword.

Delvoid are certainly onto something; the prog, post-rock, heavy riffs, quiet contemplation, and everything else coalesces into a fairly consistently solid outcome, and the likes of “Techtree” and “The Master’s House” really demonstrate what the band can achieve at their best. However, there’s a bit too much of Swarmlife that, whether due to active irritation or merely just because it doesn’t resonate, leaves a bit to be desired when comparing it to the best of some of the bands I’ve used as reference points during this review. Although flawed, Swarmlife does have considerable value, particularly if you are fond of some of the bands I’ve namedropped in this review.

Written on 19.05.2022 by
musclassia
Hey chief let's talk why not
More reviews by musclassia ››