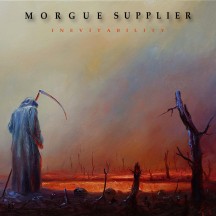 
Morgue Supplier have finally broken a six-year silence with an album that is far more twisted and forward-thinking than anything they have done before.

The band has been around for more than two decades but you wouldn’t exactly call them prolific, since Inevitability is only their third full-length. In terms of line-up, Morgue Supplier are now down to two people that you may also know from the experimental/industrial death doom dealers Drug Honkey; Paul Gillis is handling guitars, vocals, and programming, while Stephen Reichelt masters the bass (electric / piccolo / double).

Compared to previous releases, Inevitability is a step down in blasting but also a big step up in creativity. Grindcore is usually a maelstrom of blasts and growls but, in my opinion, the bands that do stand out in the genre are those who present interesting things in between the unrepentant bouts of violence. Morgue Supplier had already added dissonance and off-kilter rhythms to the formula on their self-titled, sophomore album, but this time they have gone the extra mile. The duo is taking left turns all through the album, which often sounds like a psychedelic tech-death / brutal death metal release, but in an avant-garde kind of way. Apart from embracing doom, sludge, and industrial, Morgue Supplier have also incorporated - quite unpredictably - many little pockets of disturbed melodies that worm their way into your head.

Inevitability’s greatest quality is that it never stops surprising you. Halfway into “Closing In” I feel like I am listening to Obituary performing a warped cover of Soundgarden’s “Jesus Christ Pose”. Much of “Thoughts Of Only Darkness” sounds as if Gorguts decided to play doom death metal and asked Godflesh to join them. There is a droney interlude and another droney outro in the tracklist. Occasionally, the album feels like it is drawing influences from bands like Imperial Triumphant or Ad Nauseam. In general, people who are looking for a freshly different approach to deathgrind will have quite a few things to discover in Inevitability.

The production is on point and gives room to all the instruments, avoiding the “wall of sound” effect. The parts where the bass and the programmed drums take centre stage are especially satisfying. The quality of the mix can be fully appreciated when the rhythm is mid-tempo, or even down-tempo, but even when the classic grind speed takes over, it does not sound like an annoying noise salad.

I generally find it really difficult to enjoy typical grind, and I much prefer the bands that turn the style on its head and take it for a ride out of its comfort zone. Every year, there are not more than two or three albums that do that; for 2022, Inevitabilty has one spot secured.