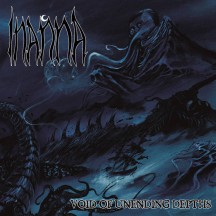 
I worry that I might be treading on some toes in reviewing a Chilean death metal album, but Void Of Unending Depths is worth some sore digits.

Just after I review one album that comes after a decade-long gap, I immediately go and review another album that’s the first from a band since 2012. Inanna have historically taken their time with releases; formed in 2000, Void Of Unending Depths is just their third full-length release. In 2012, the year that previous record Transfigured In A Thousand Delusions dropped, frontman Max Neira formed Coffin Curse with then-bandmate Felipe Zará; Zará has subsequently been replaced on drums in both bands by Carlos Fuentes, whose guitar duties in Inanna have been taken over by Cristóbal González, so there’s grounds to speculate about why it’s taken so long to follow it up. However, whatever the reason is behind the gap, Void Of Unending Depths is an album that was worth waiting for.

As mentioned in the beginning, Inanna are a death metal band, and there’s no real genre-bending going on to defy that classification; however, Void Of Unending Depths does explore the range of possibilities within that genre. “Evolutionary Inversion”, the opening song, is a bit of a standalone case; yes, there’s enough blasting to let you know where you are, but with plenty of use of more mid-tempo malevolent atmospheric riffing and exciting guitar leads, I actually get vibes of Schammasch as much as anyone else here, although in death rather than black metal form. Like Schammasch, the vocals are noteworthy on Void Of Unending Depths, although unlike Schammasch, I wouldn’t expect there to be too much divisiveness over whether they were positively or negatively noteworthy; the super-deep, zombie growls work very well on this album, as do the occasionally higher-pitched rasps.

I said that “Evolutionary Inversion” was distinct in its emphasis on slower heavy atmospherics, and for the most part it is. I’ve commented a few times on this site that I have negligible enthusiasm for modern OSDM (if something can be modern and old-school), but while I find endless rehashes of a done-to-death formula to be a bit redundant, I do like the properties of that (done-to-)death metal in fresher packags. There is cavernous production, buzzsaw riffing and sickening guitar soloing on Void Of Unending Depths, but it’s not its defining property, and there’s even some exploration of what old-school death metal entails. “Among Subaqueous Spectres” has some dirty full-pelt buzzsaws, but there’s also some cleaner, more classic-sounding riffing from the period between OSDM and its precursors to be heard as well. On top of this, there’s sounds to be found from the subsequent 30-year evolution of death metal as well, with plenty of tech-y segments and more modern riffs in store for listeners.

Furthermore, there are some progressive moments as well, such as the clean intro to “Underdimensional” with that cool early 90s prog/tech-death bass sound and celestial ambience, as well as other scattered moments, like the eerie snippet midway into “Far Away In Other Spheres”. However, although there’s proggy segments and consistently long songs throughout the album, I don’t know whether I would necessarily call it a progressive death metal album, in the same way that I don’t particularly consider Tribulation’s The Formulas Of Death to be a prog album; outside of these brief moments, most of Void Of Unending Depths is a riff juggernaut of one riff after another, and while it’s true that the songs don’t necessarily follow ‘conventional’ structures, neither does most death metal.

Now, what I’ve written in the last paragraph isn’t necessarily meant to be a bad thing; I’d say it’s a positive that “Far Away In Other Spheres” is free to relentlessly assault listeners with the same blasting riffing for minutes on end after that aforementioned break. Certainly, there’s plenty of quality riffs to savor on this album; “Underdimensional” has a delightful extended section of contorted dual-guitar riffing a couple of minutes from the end, while the dingy trudge midway through “The Key To Alpha Centauri” merits a good old fashioned stank face. Additionally, the moments of relative levity on the record, such as the clean guitar motif over the crawling outro of “The Key To Alpha Centauri”, nicely complement the relative intensity.

Still, when one encounters the closing song, “Cabo De Hornos”, it’s hard not to wish that some of its progginess and melodic inclinations permeated the rest of the record slightly more, only because of how brilliant it is. Just shy of 14 minutes, this song explores the dynamic range of Inanna far more extensively than any other song here, with some bright semi-melodic leads and solos, measured mid-tempo grooves, and more extended moments of serenity added on top of the established death metal base. The result is a song that comes after a thoroughly impressive 45 minutes of death metal and still manages to overshadow all that went before it.

Inanna’s return is triumphant; Void Of Unending Depths shows them to have a strong affinity with the various flavours of death metal, as well as a clear understanding of how to bring them together into something greater than the sum of its parts. The crowning achievement of this album has to be that immense closing song, but the record as a whole is one for genre enthusiasts to savour.

Written on 08.06.2022 by
musclassia
Hey chief let's talk why not
More reviews by musclassia ››