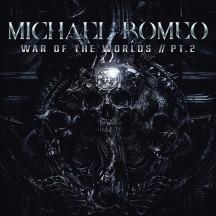 
Guitar virtuoso Michael Romeo took advantage of the hiatus his main band Symphony X seems to be under, and decided to write music for a solo project. But he got a little carried away and what he wrote was enough to fill two albums, hence we have the two parts of War Of The Worlds. The first one (which we despicably failed to review) came out in 2018, and the second one (which does get a -much deserved- review) was finally released in March 2022, even though it had been ready a long time before that.

The music on War Of The Worlds, Pt. 2 is treading the path of its predecessor in that it is a power-leaning, progressive metal album that feels and sounds very bombastic and very cinematic. Sonically the two are very similar and they sometimes share the same themes. The fact that they are siblings is also conveyed via the visual aspect; the cover arts are almost identical.

What is great about the playing and the songwriting of Michael Romeo is that his songs can be complicated but they sound much simpler than they actually are, and they are also very catchy. A good example of this is “Metamorphosis”, which sounds to me like a nod to Rush. In general, you listen to Romeo’s songs and you don’t always realise how difficult they are to play. There is this sense that something is odd with the time here and there but it is never awkward or unpleasant because it sounds cohesive and it flows naturally. And there is also quite some variety here; if you want something energetic, you have “Divide & Conquer”, if your tastes are more proggy and you’re into noodling, try out “Hybrids” or “Maschinenmensch”, if you have a soft spot for Middle Eastern motifs, there is “Destroyer” (with Romeo picking up a 7-string guitar), and if you’re in a mood for something softer, “Just Before The Dawn” is a ballad smartly placed right in the middle of the album. There is no ‘dubstep-meets-metal’ curveball such as “Fucking Robots” from the previous album, but there is an unexpected ‘Slayer-meets-Pantera’ verse/riff on “Parasite” to catch you off-guard.

On top of all that, there are interludes and sections in the album that could have been passages of a film score, where the film has a budget larger than the GDP of a small country, with impressive visual effects and jaw-dropping technology (I can easily imagine “Hunted” played during a scene featuring an intergalactic police chase). The cinematic orchestrations on War Of The Worlds, Pt. 2 are better incorporated here than on Part 1, and give the album a sci-fi, Star Wars-y atmosphere that is compatible with the concept, which is loosely based on the novel of the same name by H.G. Wells. This means that, along with Yngwie Malmsteen and Uli Jon Roth, you get some John Williams and Hans Zimmer on the side, and this is partly why it couldn’t have been a Symphony X album, although there are a lot of shared elements. Michael Romeo’s solo work is more layered, which would make it more difficult to perform live.

In terms of line-up, Romeo has kept the rhythm section of Part 1, so we get the same nasty low end of John DeServio (Black Label Society) as well as the classy drumming of John Macaluso (ex-Yngwie Malmsteen and many others). You need to listen to what Macaluso does on the bonus track “Alien DeathRay”. In fact, you should get the version with the two bonus tracks because both are well worth checking out. The big change, therefore, is the replacement of -previously unknown- Rick Castellano with Dino Jelusić, who is currently supporting David Coverdale in Whitesnake’s farewell tour. The Croatian is a mix of Coverdale, Russel Allen, and Tony Martin, and his voice is both versatile and powerful. Castellano did a good job on War Of The Worlds, Pt. 1, but Jelusić is not just good; he is great.

“A long time ago in a galaxy far, far away”… No, screw that sentence; I’ve never been a big fan of Star Wars or any other sci-fi film, series, or anything remotely touching on sci-fi for that matter. But I really, really like War Of The Worlds. Both parts of it. Maybe Part 2 a little bit more.

“Denying, defying - the dread’s intensifying
It’s all for one and one for all
Defiling, die trying - a storm electrifying
Divided we stand, united we fall”