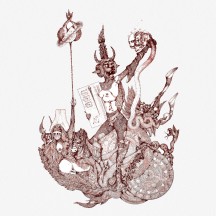 
Seven albums in less than seven years should start feeling a bit stale by now, especially with how long their runtimes were. But Esoctrilihum knows not to make the exact same album twice. Consecration Of The Spiritüs is not just the shortest one, but the most violent one too.

I don't remember exactly at which point in Esoctrilihum's short career I actually found out about them, but at that point they already had a couple of albums under their belt and had already made it clear that it would be a very prolific project. That only became more and more reinforced with passing time, as there has been no year since 2017 that wasn't graced by at least one Esoctrilihum album. And that's not even counting the two EPs they also dropped. And thankfully, none of the releases felt like the band was on autopilot and was settling too comfortably on an established sound, even though their runtimes ranged between 50 and 80 minutes. It was 2020's Eternity Of Shaog that really won me over as more than just a great prolific band, and its colder counterpart from last year, Dy'th Requiem For The Serpent Telepath felt like an even colder version of that quasi-symphonic sound. Imagine my surprise when Consecration Of The Spiritüs Flesh follows up the longest album with the shortest, and the most expansive ones with the most direct one.

I would like the reader to take "the most direct one" with a grain of salt, since I haven't exactly had time to revisit all of Esoctrilihum's early albums to verify, but just the fact that I get the feeling that this is the band at its most direct should be a pretty good indication that some gears have been shifted. Since I already mentioned that these are the two most obvious differences that set Consecration aside from its predecessors, these two combined make it a pretty intense listening experience, with all of it condensed into a 40 minute beast. The atmospheric and melodic and symphonic aspects of the previous records are pushed back to the point of near complete elimination, instead sounding more twisted and violent.

Now that that's settled, I have to admit that I'm not as won over by this one's approach as I was with previous albums', but I appreciate Asthâghul switching things up. The drumming here is probably my least favorite aspect, as the blasting feels a bit too constant, and mechanical in a way that doesn't feel like it would add to the music by giving it an industrial feel, instead feeling more like it makes the record drag more than it should for being the shortest of the bunch. Contrasted with that are the vocals, which are at their most unique here, twisted and maddening, where the growls and the shrieks move between eerie and ritualistic to laughter in the face of madness. The riffing is also less melodic, sometimes falling to the same gripes as the drumming, but still providing plenty of great moments, especially in combination with the piano on "Sydtg".

Time will tell if this will end up as my least favorite Esoctrilihum, or if the sinister pummeling approach will pay off in the long run, but if there's one really great thing that Consecration Of The Spiritüs Flesh provides, it is the possibility of even better self-editing in future Esoctrilihum releases.

Written on 22.06.2022 by
RaduP
Doesn't matter that much to me if you agree with me, as long as you checked the album out.
More reviews by RaduP ››