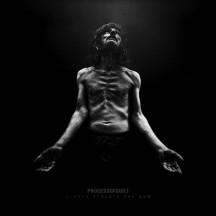 
Over the last few years, I have gotten prematurely excited on more than one occasion about a new music announcement, only to re-read the band name and see that it’s from Portrayal Of Guilt (no offence to the Texans). Finally, the announcement that I’ve actually been hoping for has come: here’s the new Process Of Guilt album.

Portugal’s Process Of Guilt first came up on my radar shortly after I’d joined Metal Storm, when I saw the near-universal adulation from the site’s contributors at the time for their 2009 record Erosion. Erosion was a fascinating concoction of post-metal-influenced melancholic death/doom; the direction the band have taken since Erosion could still be categorized with the ‘post-doom’ label some used to classify Erosion, but the ratios have very much flipped around, with the core sound on 2012’s Fæmin and 2017’s Black Earth a doomy, trudging, sludgy post-metal style built around bleak, grey tones and suffocating repetition. This change in direction certainly wasn’t for everyone, but Fæmin has been one of the most insidiously consuming albums I’ve encountered, and by now I’ve listened to both it and the stylistically similar Black Earth quite a bit more than Erosion, so I am happy to report that Slaves Beneath The Sun pretty much picks up where the band left off five years ago.

Keeping in line with the post-Erosion records, the monochrome artwork reflects the tone of the album; there’s minimal vibrancy or colour to be found in the bleakly atmospheric builds, the grim, lightly dissonant riffs and the harsh, yet impressively tonal, vocals. The album also keeps in line with Fæmin by opening with a brooding, percussive track; “Demons” crawls forward for several minutes, dragged along by a simple yet ominous repeated drum motif, around which subtly formless instrumental layers create a sense of dread before more full-blooded dissonant guitar attacks drain any last sense of joy from the world. Given how much Process Of Guilt have focused on the use of insidious, slowly evolving repetition over prolonged periods of time to crawl under listeners’ skins, it’s interesting to see this album open with the two shortest songs in the band’s discography (excluding the ‘movements’ from the Rorcal split or The Circle EP). However, although “Demons” and “Scars” did tend to slip by without me noticing on the first few (distracted) listens that I gave to Slaves Beneath The Sun, on more focused playthroughs I found myself really vibing with the (relatively) energetic groove of “Scars”.

Still, the longer songs are where Process Of Guilt really make their mark, and although the next song on the album, “Victim”, is not the longest of these, it’s the one from the album that’s made the biggest impression on me thus far. I’m not entirely convinced by the first minute or so, but there’s a pivotal moment when the track shifts into a new drum pattern and brings in a wall-of-sound layering of tremolo; from this point on, “Victim” is an engulfing, gloomy procession of sound that delivers everything that has left me so enamoured with post-Erosion Process Of Guilt.

If there’s one thing about Slaves Beneath The Sun that makes me (for now) slightly less enthralled with it than Fæmin, it perhaps lacks those moments of suffocating finality that came on particularly that album’s title track. However, this is probably due to slightly less single-minded use of overwhelming repetition, and the result is that this album’s title track instead takes listeners on a slightly more fluid and explorative journey, to great effect. Additionally, there’s perhaps slightly greater use of lighter tones on this album to contrast the brooding trudge of the core riffing found across the record.

More measured and less world-crushing than they’ve been in the past, Process Of Guilt remain just as engrossingly miserable and malevolent. Anyone who enjoyed the direction that Fæmin and Black Earth went in should be amply satisfied by Slaves Under The Sun.

Written on 26.06.2022 by
musclassia
Hey chief let's talk why not
More reviews by musclassia ››