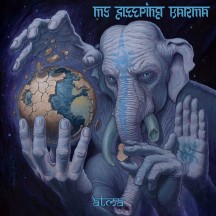 
Bavaria’s premier hallucinogen-peddlers break 7 years of introspection with Atma, conveying the emotional range of Soma with the immediacy of Moksha in some of their finest work to date.

My Sleeping Karma can hardly be called metal, but it makes perfect sense for Napalm Records to market them to metalheads in the same way that we like to partake of other instrumental rock bands, such as Mogwai. They occupy a quite specific niche somewhere in between psychedelic, stoner, and krautrock; a niche they keep carving out for themselves while remaining firmly rooted in on Atma. Described as an album shaped by personal tribulations, the release of which was long an uncertainty, it sounds like no other band than My Sleeping Karma while having an edge to it that in retrospect feels lacking in their earlier material.

Already from the cover art, it should be evident it ain’t all about sweet, immortal bliss with these guys any more; a morose Ganesha (Hindu deity of luck and beginnings) holds a shattered world in his palm, knowingly gazing at the observer. Influenced by personal tragedy and an uncertain future, the album title still refers hopefully to the Hindu concept of the self and the defining role that pure consciousness, both on the individual and global level, plays in the development (or lack thereof) of the world. Conceptually, it’s a step back from Moksha, insofar as realisation of the self is a prerequisite for attaining the aforementioned liberation. Musically, Atma is more like the introspective, laid-back Soma than the celebratory, serene Moksha, and expands My Sleeping Karma’s emotional register with a melancholic, darker edge compared to most of their previous work.

Atma isn’t a heavier record, per se, in fact I’d say Moksha had more of a metal vibe than this record, which focuses mainly on moody vibes accentuated by exemplary use of synths, laying down soaring, trebly pads that lift many of the tracks from earthen beginnings to ethereal heights. The main remnant from Moksha is the guitars’ focus on hypnotic, memorable Oriental hooks, somewhat reminiscent of Tales… and Elegy-era Amorphis melodies. It all makes for a slightly less immediate record than Moksha, and slightly less atmospheric than Soma, but finding an as much comfortable as refreshing middle ground in between, while taking a step sideways into some for My Sleeping Karma hitherto unexplored gloomier, doomier territories at times.

Fans of Soma will find themselves at home right off the bat, with a psychedelic bass groove and serene, simple keyboard hook kicking off the album with “Maya Shakti”, which references the energy responsible for an egoist, materialist world-view. The serenity will soon turn out to be a red herring, however, as the track repeatedly explodes into an ominously sludgy riff section and then settles into a marching kraut groove that allows for a mesmerising lead guitar to slowly and steadily crescendo into a dramatic mid-section. The final minutes of “Maya Shakti” ties it all nicely together with the opening movement, and ends on a note of lingering, epic melancholy.

Expectations should be high, then, for the album that follows. Lead single “Prema” is named after the Sanskrit word for love, and is the most recognisably My Sleeping Karma song on here for Moksha initiates, but I feel as if the band have already written better versions of this slightly underwhelming track. Good thing, then, that “Mukti” (another word for Moksha, liberation) comes along when it does, with a high-register synth hook soaring above a dynamic guitar dirge and driven, powerful drumming that leads Atma into dropping the synths into an unexpected trance groove that literally had me mumbling the Swedish equivalent to “omg” to myself both the first and second time I listened through “Mukti”. The guitars eventually pick up on this warbling synth groove and end “Mukti” on possibly My Sleeping Karma’s heaviest note to date, while keeping a cautiously optimistic vibe going throughout.

It is here that I decide to dedicate a short paragraph to simply state: the synths, man, the synths.

It would be a shame were I to spoil all the remaining little surprises Atma has in store for its first-time listeners; suffice to say the second half doubles down on the epic, melancholy vibe and rarely do any sections wear out their welcome. At the few marks where the repetition threatens to get, well, repetitive, a following riff variation, jolting drum pattern, or synth texture comes along to make sure you’re still paying attention. “Avatara” might be a tad too long for its own good, and feels strangely disjointed, but the two final tracks are again some of this band’s finest work to date; a melodic, saturated drive through energetic twists and turns that leave me reaching for the replay button once more.

Altogether, Atma is an emotional, memorable, relatable, replayable and highly recommended soundtrack to the current zeitgeist. Here’s to hoping there won’t be another 7 years before we get a follow-up.