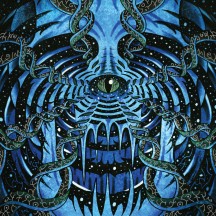 
Space is cold, but it's not always empty. Xenoglyph provide black metal to fill the cosmos.

I came across Xenoglyph's debut a while ago, and in my review I did make a case about there being two main kinds of "cosmic" metal, black metal or otherwise, some that is more fitting of the cold void of space, mostly exemplified by Darkspace, while also some that is a bit more lively albeit also very eldritch. It's not like the latter isn't cold as well, this is black metal we're talking about and the lines between the two are blurry, but the focus of the atmosphere makes the object of the oppression a bit different, from the vastness of the void to something beyond us. Xenoglyph are a great example of this sound in terms of black metal, but I should also point you towards this cosmic metal codex, which you'll notice also has a lot of tech death and doom.

I can't say that Spiritfraud is fundamentally different to Mytharc, retaining the tried and true methods of the subtly avant-garde approach to traditional black metal within the eldritch cosmic black metal context. Somehow, the biggest difference is that Spiritfraud expands both of these aspects of Xenoglyph's music, with the atmospheric focus making the soundscape of the album feel even more colossal than it originally was, while adding bits of post-metal and doom metal to give it an extra punch of gravitas to that cold atmospheric black metal backbone. All the while, the album does feel slightly off at times, twisting the sound into something more psychedelic and enveloping, adding more of a Oranssi Pazuzu sound than what was already available on Mytharc.

A lot of my gripes with Mytharc were related to how it didn't feel like Xenoglyph were properly committed to the transcendental and bizarre. That's still not entirely the case, but they continue to carve a lane for them that doesn't require commitment towards avant-garde tropes. Their songwriting ability to constantly create engaging ways to immerse the listener in cold and uncanny cosmic atmospheres is what they really have going for themselves, nailing both a sound and a flow. I still don't feel like they reached their full potential, but there's noticeable growth in both departments, thus I'm curious to see how can space get any vaster.

Written on 23.07.2022 by
RaduP
Doesn't matter that much to me if you agree with me, as long as you checked the album out.
More reviews by RaduP ››