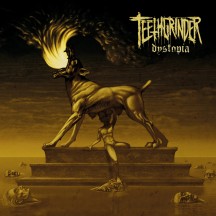 
Looking at my teeth, my dentist told me I grind in my sleep. The hustle never stops. So this is probably what Teethgrinder were doing these past six years. They were on the grind.

It is always odd seeing such varying periods in between albums, especially with no formal break-up or hiatus in between. Sure, we have that to take into account, but that only accounts for two years max. Netherlands' Teethgrinder had an EP in 2014, and then two albums in 2015 and 2016 respectively. That's a very respectable one-release-every-year policy. So what happened since 2016's Nihilism that made Teethgrinder require six years instead of the usual one to come up with Dystopia? I would probably get my answer if I actually paid attention or if I actually read some interviews, but my educated guess is that Teethgrinder spent most of that time touring. Hence why you can kinda tell that some of Dystopia is even more live-ready than their previous material.

What do I mean by that? Not that much, since Teethgrinder always had an explosive deathgrind sound that always felt live-ready. They totally ripped back when I saw them in 2017, something I can still remember pretty vividly. And the material they were playing lived up to their performance. But what I do mean is that listening to Dystopia makes me really eager to relive that experience. Not only because Teethgrinder arrived pretty early in my journey to grind, back when I barely ventured beyond Napalm Death, but because they remained a cemented thought in my brain despite not hearing about or thinking about them since. Such was their impact. Relistening to it now, their music is a bit more straight-forwards than a lot of the grind I've gotten into since, but their skill at the breakneck simplicity of it remains uncontested.

Opening up with what I'm pretty sure is a sample of Dr. Lawrence Jacoby from Twin Peaks: The Return, Teethgrinder make sure to occasionally tone down their vicious grinding to allow samples to set a mood and deliver a message. Sometimes a bit too much, and as much as I enjoy some breathing space and atmosphere, the way that they're integrated does make it feel like they break the flow more often than enhancing the music. They're not omnipresent, and you'll find a pretty good music to sample ratio, with the music itself finding plenty of variety in tempo, with additions of groove and crust to keep things interesting. In its most engaging moments, Dystopia offers a beatdown, delivering on the potential of those six damned Teethgrinder-less years.

Issues in flow aside, the intensity and ferocity on display on Dystopia is really something to behold, something to hopefully see on a stage, and something that will hopefully take less than six years to follow up.

Written on 02.08.2022 by
RaduP
Doesn't matter that much to me if you agree with me, as long as you checked the album out.
More reviews by RaduP ››