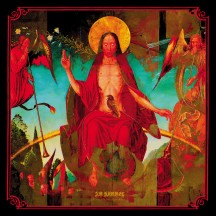 
01. Bleared By The Infinite Wings
02. The Patience And Silence Of A Saint's Death
03. The Virgin Wages Celestial War In The Seraphim Courts
04. The Fumes Of Thy Preposterous Torment
05. The Bewildering Firstling Thrusts The Knife Into Her Brother
06. As Eternal As The Starless Kingdom Of Sorrow


In the heavens, there's a frightful mix of drone and blackgaze playing.

"Himmel" is German for sky and/or Heaven, and "am" (technically a merger of "an + dem") is a preposition, and maybe a proper German speaker would be able to explain why the band went for "am Himmel" instead of "im Himmel", which seems to be the proper translation for "in the sky" or "in Heaven". Regardless the band name is a pretty good indicator of what the sound of this record is. This is the band's full-length debut, following a short EP, and information about the project is still pretty scarce. We know it's a Dutch one man band, we know it is released on Burning World Records, and that it is described as "an ecclesiastical nightmare formed by emanations from the metaphysical voids trapped in the eternal light". That certainly summarizes it.

A lot of As Eternal As The Starless Kingdom Of Sorrow is reliant on its atmosphere, one that is admittedly quite unique, and is pretty much the entire reason why I was so won over by it. I'm a sucker for albums that really suck you in and if the atmosphere they provide is unique, it's always a big plus. Hence why sometimes I'm willing to give a pass to albums in similar styles that do overstay their welcome, sometimes by a long shot, but that's thankfully not the case with As Eternal..., whose roughly 40 minutes runtime is pretty bite sized by drone standards. I did characterize the album as blackgaze meets drone, but that is a bit reductive, since it doesn't really feel like a mix of genres as much as a very droning ambient approach to some very ethereal and existential black metal. And even that black metal that is at the core, has been morphed and stretched into doom beyond the point of recognition, with the shrieks being the most intact part of it.

With a denseness that brings up The Angelic Process and Nadja and the ethereal melancholy of An Autumn For Crippled Children upon a raw and depressing backbone of Xasthur and Leviathan, albeit with a more synth-heavy approach. "Dense" is probably the word that most properly describes the album, though what does make it unique is the celestial aspect of it, one borne out of a sort of existential dread in regards to the metaphysical. The emotions that stem from the experience are almost philosophical as well as ecclesiastical. It's densely hazy in a way that isn't comfortable, but isn't suffocating and oppressive either, striking quite a middle ground between the dread and the admiration of the beyond. It's an album that you could almost call lovely just as easily as you can call it terrifying.

As much as Heaven is portrayed as blissful, one can't escape the fear of just how terrifyingly incomprehensible the whole process must be. Not only life beyond death, but eternal life, in a realm beyond the material. Metal has had its obsessions with hell (and Valhalla among others), but it's not like the alternative is free of the fears that come herein. Regardless of one's beliefs about life after death, it is not hard to imagine why life after death, regardless of its form and even in the generally agreed best outcome, is still a frightful experience. And this is what I feel As Eternal As The Starless Kingdom Of Sorrow portrays, and what the artist wanted to convey is probably different and maybe even darker. But the album is so emotionally resonant purely due to its atmosphere that it molds upon the listener's existential fears regardless.

Sure, this is an album that relies so much on atmosphere that it's a bit hard to differentiate much between the tracks, at least not without multiple listens. And maybe some of it is a bit too lo-fi for its own good. But it does so well what it does well that it stands out pretty strongly even among other drone albums.

Written on 05.08.2022 by
RaduP
Doesn't matter that much to me if you agree with me, as long as you checked the album out.
More reviews by RaduP ››