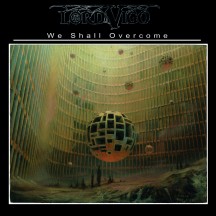 
“Influences from ‘80s new wave or prog rock are melted together with classic steel. Ultravox meets Manowar meets The Cure”. This is what the promo sheet said to describe the music of Lord Vigo’s We Shall Overcome. If there was ever a promo written with the sole purpose to pique my individual interest, this would be it.

Lord Vigo take their name after the villain in Ghostbusters II. They play epic heavy/doom metal, but with a twist; especially since Danse De Noir, they have utilized ‘80s synths and atmosphere to make their sound more akin to darkwave, and more original. We Shall Overcome sees them introduce some Rush-loving progressive rock to the mix, and they are now simply irresistible.

We Shall Overcome is the second part of a trilogy that started with Danse De Noir and it is actually a prequel of the latter. Danse De Noir had some strong ties to the film Blade Runner, and We Shall Overcome is linked to Rush’s “2112” song, both musically and conceptually. The story of the album starts 25 years after 2112, when the elder race of man has managed to beat the priests and the computers, but they have failed to achieve ecological and political stability. In case you had any doubts about the concept’s origin, We Shall Overcome starts with a song titled “Blessed Are The Meek”.

The statement quoted in the introduction of the review is heard on every song. The first single, “From Our Ashes We Will Rise” is a post-punk-/darkwave-shrouded heavy metal song; something that you’d expect to hear from Unto Others. The title track is an epic doom anthem with a chorus taken from the early Duran Duran playbook. Listening to the album, I often get the feeling that it sounds as if Iron Maiden or Rush have collaborated with The Mission to play covers of Candlemass songs, produced by Depeche Mode’s Flood. I find it difficult to highlight individual tracks because I love the whole thing to bits. However, I have to make special reference to “A New Dark Age”, which would be a Joy Division song, if Joy Division were a metal band. Its atmosphere, its progression, and the outburst of emotions that the lead guitar induces during its final third make it one of my contenders for song of the year. Lord Vigo have chosen their best composition to close the album, just like they did with “Memento Mori” on Danse De Noir. This makes for a supremely positive last impression for a record that is almost flawless anyway.

Another great aspect of We Shall Overcome is its production. It is clear, roomy, and with a loud, funky even, and Primus-sounding bass; this album is a far cry from all the canned shit we have to endure so often. The band is responsible for this beautiful result, since they did everything themselves and trusted Patrick Engel for the final master (again, like they did on Danse De Noir). All I have to say is… congratulations. Well done. This is how music is supposed to sound.

I wouldn’t have been able to hide my enthusiasm for We Shall Overcome, even if I had tried. Lord Vigo have taken my favourite music genres -gothic/darkwave, epic doom, and traditional heavy metal- and spiced it all up with a bit of progressive rock. Above all, they wrote memorable and catchy songs. As much as this album takes elements that are not unknown, I am not aware of any other band doing a fusion like this so seamlessly and so successfully. I didn't think they would top Danse De Noir, but maybe they did.

* This actually came out on my birthday; so, Lord Vigo, if you read this, thanks for the present!