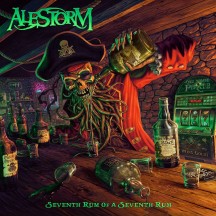 
“There are no more tales to be told! / No more stories from battles of old! / Now it seems our journey has come to an end! / We are scraping the barrel, my friend!” These lines from “Scraping The Barrel” are more relevant in 2022 than they were when Alestorm wrote them in 2011.

That self-examination was made in good humor, as all things Alestorm are, but it concealed a genuine apprehension over the longevity of the “pirate metal” gimmick. By Back Through Time, Alestorm had lost its affection for the Korpiklaani-meets-Running Wild folk-thrash that powered the first two albums, and the dearth of ideas lampooned in the above song is very much in evidence on that filler-filled album. At that particular crossroads, however, Alestorm found a means of pivoting into something more compelling: with 2014’s Sunset On The Golden Age, the band went from privateers to pioneers, finding an equilibrium between dumb pirate jokes and ambitious songcraft, between the folk-infused heavy metal extremity and flippant, hooky pop vibes. That equilibrium, though strong in its effects, was delicate in its composition, and Alestorm may be pitching headlong into having too much fun.

What I hear on Seventh Rum Of A Seventh Rum is a band that missed its chance to evolve again. Despite the successes that indulging their poptimistic tendencies has yielded – impressive mainstream visibility, a unique character extending beyond the nautical theme, and some of their best individual tracks to date – Alestorm have not managed to shake stagnation altogether. If anything, the increasing reliance on boundary-pushing may be masking this by placing more emphasis on the joke than on the material, for the most blatantly irreverent tracks appear to run on punchlines rather than melodies and the most traditional metal aspects now feel neglected in comparison. Alestorm have overcome the barrier to adding pop, hip-hop, and house music to their formula and their songs are now about partying in addition to pirates, but that has not made up wholly for the increasingly rote tracks that infiltrated No Grave But The Sea and Curse Of The Crystal Coconut, and Seventh Rum Of A Seventh Rum now suffers the most from a lack of fundamental strength.

Seventh Rum Of A Seventh Rum opens with a broadside barrage of Alestorm’s weakest material in years. “Magellan’s Expedition” is a passable single, but sounds too much like Alestorm on autopilot: the synthesized brass tucketing and snarling pronouncements will be predictable for anyone who has heard only a couple of Alestorm songs before. “The Battle Of Cape Fear River” likewise follows a familiar formula, but exudes more weariness with its subject – the best chorus we could come up with for a song about Blackbeard was “I’m a fucking pirate”? If that isn’t a sign of overreliance on the word “fuck” to do all the heavy lifting in place of a solid song, I don’t know what is. Scratch that, I know exactly what is: the next track, “Cannonball,” which is this album’s concession to ribaldry in continuation of what is apparently now a tradition. I had to consume a mason jar full of gin before I started to find its exhortations remotely funny. The song’s sudden rhythmic shift at the end is the only interesting thing about it, for it is as musically uninspiring as it is lyrically unfunny, and the album immediately slides back into first gear for “P.A.R.T.Y.”, another track that sounds like a tired and somewhat desperate attempt to keep the band’s gimmick on course.

“Under Blackened Banners” is the first exciting piece of music on the album, and from then on the album enjoys greater stability; “Magyarország,” a tribute to the homeland of guitarist Maté Bodor, is a nice piece of Hungarian-ish folk metal that, if not exactly in competition with Dalriada, has some charming ardor that is sorely lacking in the earlier tracks. The album closes strongly with “Wooden Leg (Part 3),” the final (?) chapter in the “Wooden Leg” series and another variation on the theme. But after that opening series of awkward and asinine material, too much time has elapsed by the second half of the album not to start questioning whether Alestorm’s heart is really in this anymore.

Perhaps Bowes was looking for safe harbor after his reputation took a nasty hit last year; what with Gloryhammer embroiled in all kinds of drama and Wizardthrone almost dead on arrival, it’s possible that his mind was on making Alestorm consistent, if nothing else. The little snippets of chiptune are still welcome; I like the increased synth textures on “P.A.R.T.Y.”; there are some new seafaring favorites to be found here amidst the rubble. Overall, however, Seventh Rum Of A Seventh Rum leaves me wondering whether the band has become so infatuated with its cartoonish image that it has forgotten how to respect the roots of its sound. I don’t expect a full return to the barnacular thrash of Black Sails At Midnight or anything, and I love what they can do with their silly songs when they focus on writing, but just look at “Return To Tortuga”: this half-hearted attempt to rewrite “Tortuga” as a more conventional metal track seems to reveal the weakness in the band’s metal side, which they cannot entirely make up for in the pop-oriented songs, however fun they may be.

On the Grand Scale of Piracy, with 10 being a One Piece highlight reel and 1 being a corrupted Limewire download of “Sex & Candy” by Nirvana, this ranks somewhere around a forgotten Pirates Of The Caribbean sequel.