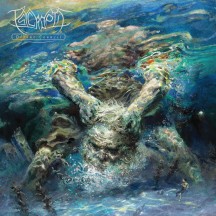 
I don’t like tech-death. The reason is that I don’t like the musicians’ masturbatory playing, and I don’t like music that suffers from ADHD. But I do like Psycroptic and their latest album, Divine Council.

For those of you who don’t know the band, Psycroptic were formed by two brothers, drummer Dave Haley and guitarist Joe Haley back in 1999, and they have now released eight studio albums, including this one. Each release has a signature sound, in the sense that you immediately recognize it is Psycroptic, but there is always some kind of evolution and the band does not like putting out the same album twice. Since (Ob)Servant (

), they have been sounding more accessible, especially to the people who find tech-death mostly unlistenable, like myself.

Divine Council begins where As The Kingdom Drowns ended, and it feels like a natural continuation. It has great lead guitar harmonies, headbangable riffs, neck-crushing breakdowns, and big hooks. Psycroptic are not afraid to let a riff or a melodic passage play for a little while, and they are not afraid to replay it further down the line of a song. As a result, the music is flowing, instead of being interrupted every five seconds because another idea kicked in. The guitar work is phenomenal as always, the drumming is crazy good, and there is a variety of extreme vocals, since Jason Peppiatt is joined by Jason Keyser of Origin fame, not on a single song as a guest, but on the entire album. Joe Haley’s wife, Amy Wiles, who first appeared in the previous album, also sings on some tracks, making Divine Council an extensively layered album vocally. Most of you probably don’t care, but even Jason Peppiatt’s lyrics about humanity’s bleak present and future are worth checking out.

Musically, it is generally very satisfying to hear how Psycroptic incorporate the -core and the thrash elements in their songwriting, which is something that results in very catchy songs. The tracks’ duration ranges from three to five minutes, which leaves virtually nothing that needs to be trimmed. The album is relentlessly aggressive and most tracks are absolutely demolishing. The opener “Rend Asunder” takes no prisoners, “Ashes Of Our Empire” is bloody brilliant, as is most of the album, honestly, and the closer, “Exitus”, is the more orchestral and anthemic highlight. Still, I’d like to point out two songs in particular that stray away from the general exercise in pummelling; “Enslavement” and “Awakening”. The former is one of the best Psycroptic songs ever with a superb progression, while the latter is a game changer for the album, introducing a slower pace and a more ominous atmosphere.

Production-wise, Divine Council is as compressed as you expect an album of this style to be. I would prefer some more presence of the bass, and I am under the impression that the synths and the female vocals could have been mixed better.

My head hurts after listening to Divine Council. Typically, this happens with tech-death albums because of the musicians’ obsession to flex their dexterity, which I personally find boring and tiring, and this is why I usually stop playing them after the first 30 seconds. This time, though, my head hurts due to my non-stop headbanging to this beast of an album.