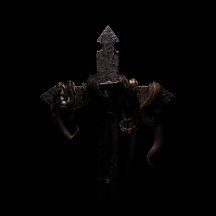 
There’s enough bands doing ‘sludgy blackened hardcore’ music that one wonders if it’s time to make a definitive name for their niche. That abundance does, however, means that bands need to offer more than just auditory venom to stand out.

The burden falls upon Hexis, then, to make their blackened hardcore noteworthy in other ways. Well, when listening to Aeternum, it becomes clear that one area in which the Danes intend to shine in on the percussive front. Pretty much from the off, the thick, bludgeoning phat sound of the drums lays the foundation for all the aggression Hexis aim to unleash. There’s not actually much reliance on drum patterns more associated with the component genres, with a scarcity in blast beats or fast punk beats; that relentless, potent bass drum/tom laser-speed assault that is introduced from the first second of “Letum” appears time and again across the record, lending an immense weight to the likes of “Interitus”, “Accipis” and “Nunquam”.

Now, there’s more than drums to Aeternum, it’s merely the case that this is the component that will make the strongest impression on you initially. Moving past the drumkit, Hexis offer vicious, morose bile that holds roots in hardcore, while leaning on black metal for the vocal approach, guitar tonality and more extreme outbursts, and on the other hand drawing from sludge in its darker, slower moments. This overlap in sounds coalesces nicely on cuts such as “Letum”, where thick, pounding riff grooves fluctuate in and out of brief blast attacks and slower dirges.

With 12 tracks across Aeternum, Hexis principally write in one of two modes; there’s the short, sharp bursts of intensity like “Interitus” and “Tacet”, with half the tracklist comprised of songs below 3 minutes of length, and then there’s the more substantial cuts. The chief contrast on this front is “Exhaurire”, which flirts with the 8-minute mark as it explores more understated, muted yet sinister tones across its contemplative, slowly evolving duration; this song moves away from hardcore towards the more misanthropic end of the post-black spectrum. “Vulnera”, the next-longest song on the record, goes in more of a grim, trudging blackened sludge direction.

This variety is needed; as impactful as the ballistic pounding of the drums can be, it is a sound that lends itself to blending together across a whole album, and the frequency with which such drumming is utilized does mean that Aeternum, while impressive as an overall concept, lacks a bit in terms of individual moments of memorability. This is arguably amplified when one starts drawing perhaps inevitable comparisons with similar bands such as Celeste, whose own approach must surely have been an inspiration on Hexis. The stylistic diversity offered by “Exhaurire”, “Vulnera” and “Amissus” is crucial in preventing burnout before the album finishes; the title track is a far more extensive musical departure, but its quiet ambience serves more as a denouement for Aeternum than a real change of pace.

This album is one that makes an immediate positive impression; the intensity of their sound and the way that the production brings that intensity to the fore is a pleasure to experience. The main thing that’s preventing me from embracing it quite to the extent that I have with some other bands in the blackened hardcore sphere is that this rock solid foundation isn’t fully exploited with enough individual moments that truly shine. Still, there’s certainly more than enough about Hexis to earn them a place of importance in the niche alluded to at the beginning of this review.

Written on 03.09.2022 by
musclassia
Hey chief let's talk why not
More reviews by musclassia ››